This article is about Sonic X, the animated series. For the comic book series about this show, see Sonic X (comics).

Sonic X (ソニックX, Sonikku Ekkusu?) is an animated television series, featuring video game hero Sonic the Hedgehog based on the storylines of the Sonic Adventure series. Its rated genres are: action, adventure, sci-fi and comedy. It was animated and produced in Japan by TMS Entertainment with the partnership of SEGA and the Sonic Team. In 2003, 4Kids Entertainment licensed Sonic X for American U.S. licensing in a joint effort between 4Kids and VIZ Media (it was formerly with ShoPro Entertainment before ShoPro and VIZ, LLC merged into VIZ Media) & distributed by FUNimation. It is also broadcasted in Europe, Australia, Brazil and Latin America by Jetix, and in Canada by YTV.

Originally planned as a 52 episode series which would be inspired by the storylines of the Sonic Adventure series, Sonic X has now expanded to 78 episodes which were shown in Thailand, and France in February and March of 2005. In the 4Kids dub, profanity and sexually suggestive references were removed, since these themes were inappropriate for their planned target audience.

Note: There has been minor debate as to whether or not the first two seasons of Sonic X take place on Earth. Episode 8 showed a map of the planet, which did not look much like Earth, but episode 38 showed a view of the planet, in which Texas and Africa are noticeable. The design of the map in episode 8 could be described as laziness to draw Earth properly, as seen in many other cartoons. In the Japanese version, it is established that Chris' planet is indeed Earth.

During what seems to be a routine attack on Doctor Eggman's headquarters to rescue Cream the Rabbit and Cheese the Chao, Sonic and his friends are caught in a massive and mysterious explosion that transports them to what, at first, appears to be another dimension. Separated from his friends, Sonic eventually finds himself in custody of a twelve year old boy named Christopher Thorndyke, who saves Sonic's life after he nearly drowns in his pool. Chris lives in a lavish mansion, funded by his two celebrity parents, with his inventor grandfather, Chuck. Chris aids Sonic in locating his friends, and it is not long before Dr. Eggman makes his presence known. As Sonic and Eggman race to collect all the Chaos Emeralds (Sonic wants to use them to get home to his own dimension, and Eggman wants to use them to conquer this new universe), Chris must deal with the stress caused by having parents that are too busy to bother taking care of him. The first 26 episodes focus on Sonic and the other's adjustments to Earth and eventually, all of the Chaos Emeralds are retrieved and the chaos power warped parts of their home planet to Earth (like Angel Island). On the second half, the show focuses on the plots of Sonic Adventure, Sonic Adventure 2, and a bit of Sonic Battle. In the end, Tails and Chris' grandfather invents a dimensional portal to send Sonic and the others back to their own world, but before Sonic leaves, Chris kidnaps him because he does not want Sonic to abandon him as he feels his parents did. Eventually, with the help of Sonic, Chris comes to terms with his feelings and Sonic returns to his own dimension. However, Chris vows that one day, he will see Sonic again.

It has been six months since Sonic and friends returned to their own dimension. On Chris's planet it has been six years and Chris is now eighteen and seems to have a relationship with Helen. He has been working on repairing his grandfather's dimensional portal. In Sonic's world, a new girl named Cosmo arrives on Sonic's planet, looking for the legendary one who can wield the powers of the seven Chaos Emeralds. Sonic, having been nearly defeated in outer space by a new enemy called Dark Oak, scatters the Chaos Emeralds across the galaxy, in order to prevent Dark Oak from using their power. When Chris uses the dimensional portal, he suddenly finds himself in Sonic's world. His age has regressed all the way back to the age he was when he first met Sonic; however, Chris still has all his memories of the years he spent repairing the dimensional portal.

Chris learns that to Sonic, only six months had passed. During their reunion, Dark Oak and his Metarex Army attack Sonic's planet and steal the "Planet Egg" from it. Without the Planet Egg, all the trees and plants on Sonic's planet will wither and die. Sonic and his friends decide that Dark Oak must be stopped, and they venture into space to retrieve the Chaos Emeralds.

This series is similar to Sonic Heroes and Shadow the Hedgehog such as Shadow surviving and being released with memory loss for the former and the common Metarex looking like the common Black Arms for the latter. After many run-ins with Dr. Eggman, and the pursuing Metarex Army, Cosmo's dark secret is eventually unveiled: She has been an unwilling spy for the Metarex all along, and the Metarex themselves are actually part of the same race of autonomous, anthropomorphic plants that Cosmo is of, having twisted and modified their bodies for combat after war overtook their planet. They now must depend on the energy of the Planet Eggs to stay alive. When the Metarex enact a plan that could destroy the entire Universe, Cosmo sacrifices herself in order to save everybody with the help of Super Sonic and Super Shadow; much to the grief of Tails, who had fallen in love with Cosmo during the course of their adventure. It is Tails himself who must kill Cosmo in order to release her power, which would halt the advance of Dark Oak and return him to his benevolent form. Her essence is manifested in the form of a seed, which Tails later cultivates.

With Metarex destroyed, Eggman builds an invention that sends Chris home and Chris accepts, willing to leave all his friends to return home. Soon thereafter, Dr. Eggman revives his previous rivalry with Sonic, albeit a light-hearted one. The series ends with unresolved cliffhangers, such as the whereabouts of Chris and Shadow (although the Japanese version reveals Shadow is alive, depicting him looking at Molly's memorial).

In late 2004, production sketches, model sheets, storyboards and episode scripts of a supposed Series 2 began surfacing. Many dismissed them as a fan-made hoax as neither Sega nor TMS had officially announced continuing Sonic X beyond the original 52 episodes. It was not until early 2005 that Jetix France began to air the 26-episode "Series 2" shortly followed by a Taiwanese station and on September 10, 2005, 4Kids Entertainment began to air "Series 2" calling it "Season 3". Despite being made in Japan and dubbed into Japanese the show has not yet been aired there; in fact, currently, the only way to view "Series 2" in its original native language (Japanese) is to purchase the Chinese Video CDs, which feature Japanese dialogue with Chinese subtitles. This Video CD uses the second version of the Japanese opening theme, "Sonic Drive", and the second version of the Japanese ending theme, "The Shining Road", as well as a new ending sequence with the song T.O.P.

Rumors have also circulated about a possible fourth season of Sonic X being in development, for instance, according to SonicHQ TMS is listing Sonic X among the anime they are producing, (although this may be because the third season has not yet been broadcast in Japan). The ending of episode 78 has also fueled speculation. There were many cliffhangers such as what happened to Chris. In the very end after Sonic and the gang take off in the X-Tornado, a pot is shown with a small plant in it which could supposedly be one of Cosmo's seeds. In addition, Shadow is shown to be alive, him having put a rose next to Molly's grave. This scene is excluded from the English version, although he is certainly still alive. There are other details to support another season, including how TMS' site says "78+ episodes", but TMS said at SonicAnime.net that there are no episodes being produced.

A concept art video/trailer released before Sonic X contain many things which were changed before the show was actually aired. These included a single still picture of a blue/gray hedgehog (the picture to the right). This image was then found on the official Sega website with the name Nazo.jpg. Since he has not appeared in the actual show and Sega has given no more information about him, Sonic fans popularly refer to him as Nazo, which means "mystery" in Japanese. Also because of the lack of canon information, much debate has followed about who he was to be. One theory is that he was an early design for the show's "Super" or "Hyper" form of Sonic, or the "Dark Super Sonic" that appeared in Season 3. Another is that he was in some way related to Silver the Hedgehog from Sonic the Hedgehog. Others believe he was to be an entirely separate entity. Many assume that he was to be a villain, but there is nothing to support this but one's interpretation of the image. Nazo has also spawned much fanfiction.

In September 2005, Archie Comics, publishers of the North American Sonic the Hedgehog comics started a Sonic X comic book series based on Sonic X. According to writer Joe Edkin, the first nine issues will take place in the TV continuity between episodes 32 and 33, which falls between the Sonic Adventure and Sonic Adventure 2 story lines. After this, the stories' chronological positions will vary for some time, although in progressively later points in the series. The series is based off the English version, though fits the continuity established in the original Japanese version. Now Sonic X comic has ended and will continue in Sonic Universe, but an editor's note at the end of issue #40 states that Sonic X, or at least the characters, will return, indicating that it may be developed upon in the Sonic the Hedgehog comics or that they hope for the characters' returns in either Sonic X anime follow-ups or appearances in games.

The 4Kids version of the show was backed up by a toyline. The early figures in this line were in fact re-releases of an earlier Sonic Adventure toyline, criticised by many for awkward poses and poor sculpting. The line has currently moved onto more accurate and updated figures. Taking a concept from the popular Marvel Legends toys, one wave presents each of the 5 characters in it with part of a generic E-Series robot. Fans who buy the whole wave can complete the robot as a 'bonus' figure. Further waves include the re-release the first wave with the addition of a special keychain, the Space Fighters collection and the Chaos Emeralds collection.

An educational game based on the series, also titled Sonic X, was released for the LeapFrog Leapster system.

For the United Kingdom, much of Europe and Brazil the Opening Intro was changed to a female singer repeating the show's title over numerous times, the US ending theme was kept however.

Differences between American and Japanese Versions 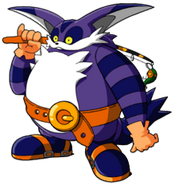 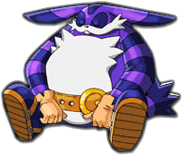 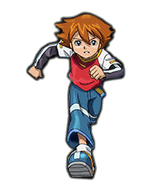 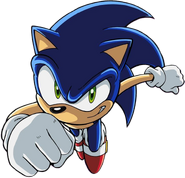 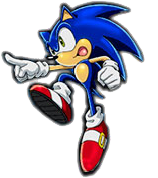 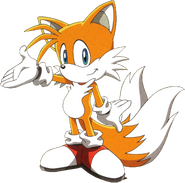 Retrieved from "https://sonic.fandom.com/wiki/Sonic_X?oldid=337700"
Community content is available under CC-BY-SA unless otherwise noted.