Sonic Tennis DX (ソニックテニスDX[1], Sonikku Tenisu DX?) is a mobile phone game released as a part of the Puyo Puyo! Sega service offered by Sega. It is an updated version of the Sonic Cafe game, Sonic Tennis.

Sonic Tennis DX features simple tennis gameplay, in which the player must hit the ball back and forth with the computer controlled opponent. In gameplay, each playable character has their own special skills and abilities. These skills are activated by accumulating power by keeping the rally in action.[1]

There are two modes that are available in Sonic Tennis DX, with very different gameplay between the two:

There is also a ranking system, which allows players to compete for the highest score possible. 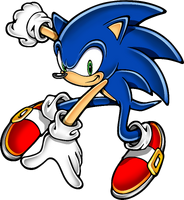