Sonic Sports Basketball is a ticket redemption game released in 2010. The title include linking up to fifteen units, original hip-hop mix music, a high quality bass speaker, built-in ticket dispenser, and Sega-branded basketballs. The game was rebranded in 2016 with a new look and new features.

Sonic Sports Basketball possesses a built-in ticket dispenser, where players are challenged to hit the target scores. If they hit the target scores, they will move onto the next level. There, they have to beat the highest score. Once that score is beat, they will move onto the nest level, and the process starts over. With each cleared level, the gameplay will change. The level of difficulty also increases with each stage. 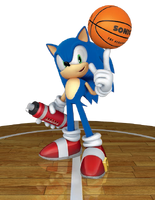