The icon of Sonic Snake.

Sonic Snake is an online Flash game published on the 4Kids TV website by 4Kids Entertainment in January 2005 to promote the then-airing anime series, Sonic X. It is a simple Sonic X-themed game of Snake.

The game plays exactly like a classic Snake title, taking place on a 2D bordered plane. The player controls Sonic the Hedgehog as a "snake" represented on the screen by a small square. The snake can be moved left, right, up or down as it propels in that direction automatically. A single Ring spawns in a random position on the plane, which the player must collect to create a trail of squares behind the snake, forming a tail and increasing the score. The tail is a fixed number of units away from the snake's head, and colliding the head with any of its segments or the borders of the arena will result in a Game Over. As the snake's tail gradually becomes longer, it becomes more difficult for the player to avoid colliding the head with the tail or the borders. Upon collecting a Ring, another appears in a random position, and the process repeats indefinitely until a Game Over occurs. 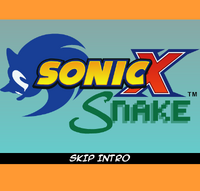 Intro sequence
Add a photo to this gallery