The player controls Sonic the Hedgehog as he uses the Wave Cyclone. The gameplay is exactly the same as how the player uses the Wave Cyclone in Sonic Rush Adventure, substituting the Nintendo DS stylus for the mouse. The player must hold down the left mouse button to move Sonic forward and move the mouse left and right to avoid obstacles. The Wave Cyclone has Boost Gauge that can be filled by collecting Rings and performing Trick Actions off of Jump Panels, the player can double-click and hold the left mouse button to Boost. The objective of the game is to reach the goal in the shortest possible time whilst avoiding damage from obstacles such as bombs, robots and rogue fish.

As well as the game, the main menu offers several other options, such as updates for Sonic Rush Adventure and a leaderboard for high scores. 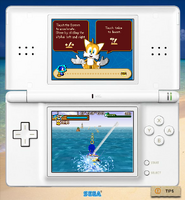