Sonic Rush Adventure (ソニック ラッシュ アドベンチャー, Sonikku Rasshu Adobenchā?) is the second Sonic the Hedgehog game for the Nintendo DS, and the sequel to the best-selling Sonic Rush. Sonic Rush Adventure sees Sonic on the high seas in Blaze's dimension. It was released on 13 September 2007 in Europe, arriving in the US on 18 September and Australia on 27 September. The Japanese version was released on 18 October 2007.

Sonic and Tails are tracking a mysterious, unknown source of energy in the Tornado, when they are sucked into a hurricane. The two then find themselves on an island, where a raccoon girl, named Marine, takes care of Sonic and Tails when they woke up. Marine tells the dynamic duo that she wants to go adventuring. With this, Sonic and Tails set off for different islands, and the adventure begins.

Using materials of different jewels and metals, Tails builds a waterbike called the Wave Cyclone, which they use to sail to a jungle island and a machine island, collecting more materials as they go along to build a sailboat. While there, they encounter two evil robots (Ghost Rex and Ghost Pendulum), whom Sonic destroys in battle.

After Tails builds the sailboat, Ocean Tornado, they set sail for a small island. They run into a robot named Johnny, who believes he is the fastest, and races against Sonic. Sonic races Johnny a total of seven times in the course of the game, and Sonic receives a Chaos Emerald for winning each race.

When they arrive at an altar on the small island, an underwater cave called Coral Cave rises out of the water. Inside Coral Cave, they encounter a robotic pirate, Captain Whisker, and his minions Mini & Mum, as they steal the Jeweled Scepter. Suddenly, much to Sonic's surprise, Blaze the Cat arrives in an attempt to stop Whisker from taking the scepter. Both Sonic and Blaze are shocked to see each other, but Whisker sends a robot named Ghost Kraken after them. Although the robot is destroyed, Whisker escapes with the scepter.

When asking Blaze what she is doing here, she tells Sonic that she was going to ask the same thing. Sonic and Tails then have a shocking realization: the Tornado sent them to Blaze's world. Sonic and Blaze agree to work together and get the Jeweled Scepter back from Whisker. Tails builds a radar, which detects electromagnetic activity coming from an area where ghost ships are rumored to be. They go to the Haunted Ship and collect Silver Material, while fighting off Whisker's robot, Ghost Pirate. Whisker escapes again.

Tails then builds a hovercraft out of Blue, Iron, Green, Bronze, Red and Silver Materials, so they can go past obstacles to new areas, first going to Blizzard Peaks to ask the Vikings about the pirates. However, Whisker and his Ghost Whale have frozen the Vikings. Sonic and Blaze destroy Ghost Whale, and Blaze unfreezes the Vikings, who say that the pirates might be using an ancient ruin, which was once a city in the sky, as their hideout.

Heading east to an island where earthquakes are sourced, Sonic, Tails, Blaze, and Marine are blasted up to a floating island in the sky called Sky Babylon, where they confront Whisker and destroy his Ghost Condor. Whisker escapes, and Blaze reads an ancient monument which Whisker had intended to destroy, as it details the location to the pirates' hideout. As its entrance is underwater, Tails builds a submarine. In the meantime, Blaze collects the Sol Emeralds.

They find the underwater cave, but cannot get through a gold door into the pirates' hideout. However, Whisker, being extremely dim-witted, inadvertently tells them that they must align the symbols on the door and that there are three markers on separate islands giving clues as to do this. After finding the three markers on hidden islands, Sonic, Tails, and Blaze tell Marine to stay at Southern Island, as the upcoming battle with the pirates will be more dangerous than any challenge they've faced so far. Marine insists that she goes with them, and Blaze yells at her, and calls her a nuisance.

Sonic, Tails, and Blaze return to the gold door and enter Pirates' Island, where they confront Whisker and Johnny, who is revealed to be Whisker's first mate. Sonic and Blaze defeat Whisker and Johnny, who escape to the ocean through a hole in the ground, mentioning working for a boss. Marine, hoping to prove her value as a captain, chases the pirates to their ship, the Big Swell, but is captured by Whisker. Tails tricks Whisker into thinking the scepter is somewhere else on the ship, distracting him and allowing Sonic and Blaze to rescue Marine from Whisker's ultimate robot, Ghost Titan. In an intense battle, Sonic and Blaze destroy Ghost Titan, and the resulting explosion engulfs the entire ship and the pirates, sinking them while Sonic, Blaze, Tails, and Marine escape.

Marine revealed that she took the Jeweled Scepter from Whisker while on the ship, and gives it to Blaze, who returns it to Coral Cave. Afterward, Tails plans to use the Chaos and Sol Emeralds' power to build a device to return to their dimension. However, the Jeweled Scepter is stolen again, and when everyone rushes outside, they see that the thieves are Dr. Eggman and Dr. Eggman Nega, who are working together to unleash the power of the Jeweled Scepter with something called the "Power of the Stars", which they recently discovered is located below Southern Island. They created Whisker to do most of the work for them, but as Whisker is gone, they stole the scepter themselves.

In the end, Sonic and Blaze found out that the Emeralds brought them together once again, and did not threaten to destroy both worlds this time because they were stable (and not abused by Eggman and Eggman Nega as they were before) and always seem to want Sonic and Blaze to win. Tails makes a ship to bring himself and Sonic home (called the SS Tornado EX). Sonic and Blaze once again promised to meet again one day. As they depart from the island, Marine comes with her new boat and thanks them for their times together and hopes to see them again someday as Sonic and Tails leave.

As Sonic (and later, Blaze), the player begins each adventure from Windmill Village on Southern Island. Bringing up the Sea Chart, the player has to plot their route using the stylus. After plotting the desired route, the character begins to race to one of the seven main islands using one of the four ships, a waterbike named Wave Cyclone, a sailboat named Ocean Tornado, a hovercraft named Aqua Blast, and a submarine named Deep Typhoon. On the Wave Cyclone, Sonic can collect rings and perform tricks to fill up a Boost Gauge. When Sonic uses the boost, the water bike speeds up and becomes temporarily invincible until the Boost Gauge runs out. While using the Ocean Tornado sailboat, the player can shoot enemies and rings with either bullets, cannonballs, or a flamethrower. Each varies in strength and clip size before reloading. Sailing in the Aqua Blast is roughly similar to using the waterbike, however there are no ramps, and holding the stylus down charges up a laser which is fired by releasing it. Using the Deep Typhoon submarine involves tapping (sometimes sliding) rhythmically on enemies and powerups to fire missiles at them.

When the player arrives at one of the seven main islands, the gameplay here is just traditional 2D side-scrolling stages: get to the goal at the end of the level, which is identical to Sonic Rush. Sonic Rush Adventure uses the trick system, first introduced in Sonic Advance 2, in which the character can perform aerial tricks by pressing the A, B and R-button in mid-air. By doing tricks or defeating enemies, the Tension Gauge will fill up, allowing the character to perform a Super Boost/Fire Boost until it runs out. The Tension Gauge decreases over time and whenever the character takes damage. There are two acts per every level, and after completing them, a 2.5D boss battle is played.

After unlocking Blaze, the player is given a choice of what character to use. While neither character differs extensively from the other, there are several key differences. Blaze can hover, and her aerial tricks propel her higher. Also, when she encounters flames in Sky Babylon, they die down, allowing her to pass unharmed. As for Sonic however, Sonic is considerably faster than Blaze in comparison and he can perform a Homing Attack when he's close to an enemy. Blaze, as such, can be considered the 'easy' mode - her hovering allowing for the player to avoid pitfall deaths, and her tricks let her rescue herself from the same fate. Sonic is the more time-attack based character and is primarily used for gaining a higher score/faster times.

Another new gameplay feature is the inclusion of Materials. These are used by Tails to build new vessels for the player. Received at the end of each stage, the number earned is determined by rank, with S earning four and C earning just one. The Materials earned depend on the stage. When the game has been beaten once, Materials are used to power-up the current vessels to let them travel further and sustain more damage.

At Marine's house, the player can also engage multiplayer battles using DS Download Play, as well as playing using Nintendo Wi-Fi Connection, which allows the player to race against other people online using Sonic or Blaze, or Ring Battles where the player has to collect as many rings as possible, spread throughout the map. In Time Attack, the player can either race on the main stages or play a 5-lap race on Hidden Islands (this feature was originally introduced in Sonic the Hedgehog 3). Saving is no longer automatic after completion of a level, and is done via the menu while on the island.

Among other events, Sonic can find Johnny and end up racing against him for one of the Chaos Emeralds. Blaze has her own set of seven jewels to collect, the Sol Emeralds, and she can earn them by completing a series of special missions. Collecting all fourteen Emeralds will unlock the final stage.

In the field, the game plays much like it has in previous Sonic handheld titles, and nearly identically to Sonic Rush. Since Sonic and Blaze work together in this title, the player may choose between them before each stage. Cutscenes remain the same regardless of player choice.

Critical reaction to Sonic Rush Adventure was very positive. Noticeable improvements over the first Sonic Rush were fewer bottomless pits, better enemy placement, and no more use of supporting characters to occupy the lower screen during boss battles. However, many reviewers commented on having to replay levels multiple times, and weakness in the story sections.[1][2] Game Rankings currently scores it 80% based on 33 reviews, compared to Sonic Rush's score of 83% based on 57 reviews. 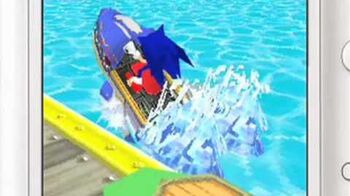 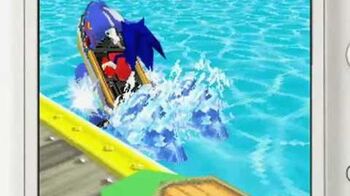 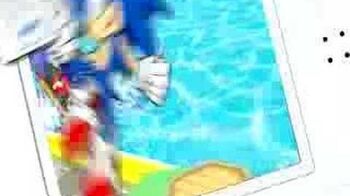 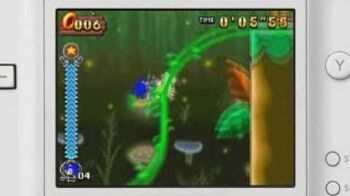