In both modes, the objective is to reach the Goal Ring whilst jumping over terrain and evading Egg Pawns. As well as move forward, the player can Spin Jump and perform a Slide Attack, though neither inflict damage upon Egg Pawns. If a player Spin Jumps on an Egg Pawn, they will instead bounce off of it.

In addition to the game, the main menu offers several other options, such as updates for Sonic Rivals, a leaderboard for high scores and an e-postcard sending service. 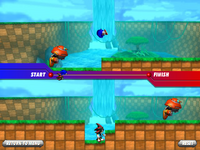 Gameplay of Sonic and Shadow in Sonic Rivals Dash.
Add a photo to this gallery