Start a Wiki
watch 01:50
The Loop (Games)
Do you like this video?
The Sonic Parade Balloon is a huge helium balloon shaped like Sonic the Hedgehog in the Macy's Thanksgiving Day Parade.

In 1993, due to Sonic's popularity, the character got a balloon made of him in the Macy's Thanksgiving Day Parade, being the first-ever video game character to appear in the parade.[1] The Sonic the Hedgehog Boom version of the Sonic the Hedgehog Spinball main theme played in the NBC footage. Unfortunately, the balloon popped after colliding with a lamp post at Columbus Circle, injuring an off-duty police officer and a child. On NBC, footage from its test flight was used.

In 1994, the balloon was repaired so it could be used as a decoration during the Sonic the Hedgehog 3 launch event in Punxsutawney.

The balloon reappeared for the next Macy's Parade that year. Sonic was the lead balloon that year and flew until the end. Then-co-host of the parade Katie Couric referenced his previous appearance by saying "He ran into a little trouble last year cause the winds were so high, but we are glad to see him doing well this year." [2]

In 1995, the balloon appeared after the Sega sponsored Pico Bus. However, within the route Sonic's mouth was ripped and was eventually removed entirely after losing too much helium. On NBC, footage from the 1994 parade was used, and the accident was not mentioned by the hosts.[3]

In 1996, the balloon flew to the end. Even though the Sonic the Hedgehog Spinball theme played that year for the balloon, the theme also played on the cheerleader float behind the balloon.[4]

In 1997, due to very high winds, Sonic was ripped apart on a lamppost and had to be removed. Once again, footage from the 1994 parade played.[5] The balloon was retired after that year.

A new Sonic balloon was made in the 2011 Parade for Sonic's 20th Anniversary [1]. It was a 350lb. balloon, based on the modern incarnation of Sonic. He lead the parade off that year (behind star-shaped balloons with the words "Macy's"). Splash Hill Zone Act 1's theme from Sonic the Hedgehog 4: Episode I was played in the background. [6]

The balloon reappeared in the 2012 parade, he was the fifth to last balloon that year. [7]

In 2013, Sonic was the second character balloon shown (after Snoopy and Woodstock from Peanuts). He did suffer a mishap that year, His left arm was caught on trees and had to be cut free but did not get damaged. [8]

Sega confirmed in 2014 that Sonic would not be returning to the parade after three years. 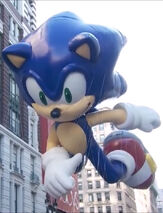 Sonic the Hedgehog in other media
Retrieved from "https://sonic.fandom.com/wiki/Sonic_Parade_Balloon?oldid=2225847"
Community content is available under CC-BY-SA unless otherwise noted.