Sonic Origins[5][8] (ソニックオリジンズ, Sonikku Orijinzu?) is an upcoming video game compilation consisting of side-scrolling games from the early Sonic the Hedgehog series, which is being developed by both Sega and Headcannon,[1][2] and published by Sega. It will be released internationally on 23 June 2022 as a part of the Sonic franchise's 30th anniversary, with versions coming to all of the latest platforms.[8][5] The game is to be launched as a digital standard edition that includes the main game, and a digital Deluxe edition with extra content and functionalities.[9]

Anniversary Mode allows players to experience the gameplay of the titles in Sonic Origins in a new format for beginners by providing a full 16:9 aspect ratio and offering players an infinite number of lives to keep the fun going without having to worry about Continues, Time Overs, or Game Overs.[9][10] The player can also use Coins to retry the Special Stages as many times as they need until they have collected all the Chaos Emeralds or Time Stones.[10]

Classic Mode allows players to experience the gameplay of the titles in Sonic Origins in their retro form with classic challenges. This mode features their original screen dimensions with a 4:3 aspect ratio, and will include the classic finite life system, time limits, and Game Over gameplay.[9] The sides of the screen in this mode will be black, but can be decorated with letterbox borders that are available through DLCs.

The Boss Rush is a mode where the player can go up against all of the games' different bosses sequentially to earn Coins.[11][10]

Story Mode is a new feature in Sonic Origins where the player takes control of Sonic and runs sequentially through all the classic Sonic titles in chronological order. This playthrough will feature new animated cinematic cutscenes.[10][4]

Mirror Mode is a new feature in the games that flips the entire Zones from left to right, effectively allowing the player to complete the levels from the opposite direction.[11] It can be unlocked after clearing either Classic Mode, Anniversary Mode, or Story Mode.[10] Alternatively, it can be unlocked from the start via the Start Dash DLC.

My Data & Ranking is an online leaderboard. Here, the player can record their best time for each Act and check out the Ranking to see players' times around the world, where they can compare it to player results from around the world.[11][10]

Mission Mode is an extra feature in which the player has to complete Missions from Acts of all four games. In them, the player has to complete certain objectives. It makes use of the rank system to grade the player's performance, with "S" being the highest rank, followed by "A", "B", and "C". This feature lets players put their skills to the test and earn Coins by competing said missions, with the rank determining the amount of Coins earned.[9][12][10]

The Museum is a feature where the player can unlock a variety of collectible content and add it to their collection, such as music, profiles and artwork. As the player progresses through the game, they will automatically unlock items in the "Normal Collection." They can also use Coins acquired from Boss Rush and Mission Mode to unlock items in the "Premium Collection." Some content is from the original games' development stages and has never seen released to the public.[10]

The Start Dash Pack[9] serves as a free pre-order bonus pack for those pre-ordering the game, and includes the following:[9]

The Premium Fun Pack[9] is purchasable for $3.99, and will have the DLC that the Digital Deluxe features available on it. It includes the following content:[9][11]

The Premium & Classic Sound Pack[9] is purchasable for $3.99, and includes the following:[9]

According to Takashi Iizuka, similar to Sonic Colors: Ultimate, Sonic Origins was created for new fans of the Sonic the Hedgehog series following the success of recent games and the Sonic the Hedgehog film who wanted to know about the "origins" of Sonic. In addition, the four Sonic titles were made playable on current hardware without running on an emulator, given the game is a port to current consoles. As such, this would allow fans to play them on a 16:9 aspect ratio.[14]

While emulator-based porting is easier to do, since the games chosen for Sonic Origins have been played for several years, Iizuka wanted to take this opportunity to revive them again on the current hardware. With that in mind, the team dared to try porting. With the games not running on emulation, the team were able to modify the games themselves. There are also plans to add elements that would make it easier for beginners to play the games, similar to Sonic Colors: Ultimate.[14]

In July 2021, Sonic Origins was stated to still be in the early stages of development.[14]

In the April 2022 issue of License Global magazine, an advertisement for the Sonic the Hedgehog series was featured on page eleven which used the key art of Sonic Origins, predating a formal reveal of the art from Sega.[20] The game later received a full reveal on 20 April 2022. This would include the release of the game's official trailer and the reveal of the game's scheduled release date for 23 June 2022.[12]

The music for the official trailer of Sonic Origins was composed by Hyper Potions.[21]

ON 20 April 2022, a digital deluxe edition was announced that includes the following in-game content:[12] 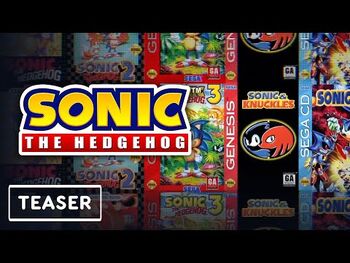 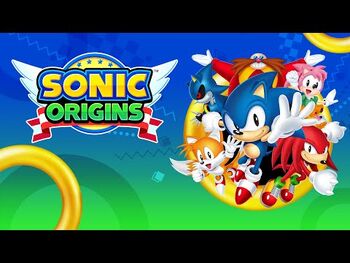