One of the screenshots from Sonic Mars.

Sonic Mars is an unreleased spin-off game in the Sonic the Hedgehog series which was original designed for the Sega 32X. A concept game, this title got canceled due to unknown reasons (presumably due to a combination of the Sega 32X's limitations and its ultimate failure in the market), and the project was moved to the Sega Saturn where Sonic Mars gradually got reworked into Sonic X-treme.

The game itself was going to corporate elements from the Sonic the Hedgehog television series, which was airing around the time of its development. 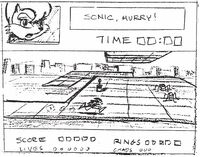 Sonic Mars's proposal was assembled on May 17, 1994 by then-lead designer Michael Kosaka. Assisting Kosaka with the proposal were Chris Senn and Don Goddard. The plan was to make this game the first 3D polygonal video game in the Sonic the Hedgehog series, complete with three-dimensional locales and characters from Sonic's world. It was also decided early on that Sonic Mars was to be set within the framework of the Sonic the Hedgehog television series, which was still airing at the time of this game's conception. It was to include two playable Sonic the Hedgehog television series characters: Sally and Bunnie Rabbot, as well as Tiara Boobowski (Tiara Cyberooski in this game, who would later be moved to Sonic X-treme). Additionally, Antoine and a Swat-Bot were planned to appear, the former being rescuable and the latter signaling the player was close to the boss.

After presenting the game to Sega of America's management, they gave the game green light and left the Sega Technical Institute to develop the game. When it was shown what the American department of STI was developing as the next entry in the Sonic series however, Yuji Naka shook his head and said "good luck". Naka's response was based on the less-than impressive material he had been shown and his first-hand experience on the difficulties involved in developing a Sonic game.

Not long after the proposal had been green-lighted, Michael Kosaka left Sega as a result of issues between himself and Comix Zone's developer, Dean Lester. Taking over as lead designer was Chris Senn. Don Goddard meanwhile began reworking the script to Sonic Mars.[1] Some time after, the Sonic the Hedgehog television series elements were dropped due to disinterest from the creators. After then switching systems, the game itself would end up being completely reworked into what would become known as Sonic X-treme.

In 2007, an early script[2] of Sonic Mars by Michael Kosaka was leaked. Interestingly enough, on the list of upcoming games are Sonic the Hedgehog 3+ and Sonic Stadium. Another script[3] was also leaked by Don Goddard. The cover page of the Michael Kosaka script is dated May 19, 1994 and the Don Goddard script was created later.[1]