This article contains a list of glitches from Sonic Mania and Sonic Mania Plus. Unless otherwise noted, all glitch names are conjectural. Many of them have not been confirmed by Sega.

The counter resets when a character lands back on the ground. But if enemies are hit with a rolling attack and the player continues to stay off the ground, the counter never resets - rolling back and forth in areas with regenerating enemies such as the Splats in Press Garden Zone Act 1 can let the player max out their lives counter at 99 quickly by collecting vast amounts of 10,000-point awards (an extra life is awarded every 50,000 points). 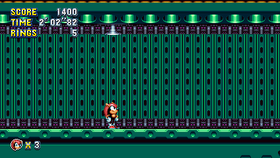 The Goal Plate partially stuck in the ceiling. 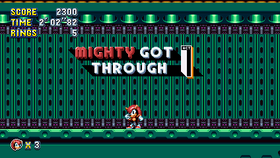 The Goal Plate completely stuck in the ceiling.
Add a photo to this gallery

In the initial release of the Nintendo Switch version, performing the Drop Dash on the Tornado in Mirage Saloon Zone Act 1 as Super Sonic will crash the game. This glitch was fixed in the v1.03 version of Sonic Mania.

If the player hits a spring that pushes them while they remain in contact with the floor, they can push down to enter a Spin Dash and then hold the direction opposite of the one they are moving in to play the current character's pushing animation, even though they are not pushing anything.[2]

After defeating Shiversaw the end of Press Garden Zone Act 1, if the player runs to the far right of the area and faces left when the Goal Plate lands, the player will walk backwards during the intro cutscene to Act 2. 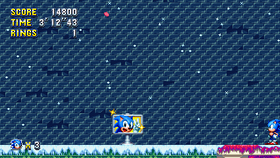 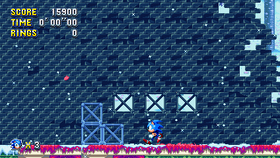 Sonic the Hedgehog's Moonwalker
Add a photo to this gallery

Using Debug Mode to cheat Sonic or Tails into the Heavy King boss arena in Lava Reef Zone Act 2 (located below and to the right of the Heavy Rider's boss arena) results in the character glitching to Knuckles' sprites when remembering Eggman's theft of the Master Emerald and when demanding the Heavy King to leave the shrine before attacking the claw-arm machine. The cutscene after the battle which sees Knuckles use a Warp Point to reach Metallic Madness Zone is also skipped.

This glitch was fixed in 1.04 version of Sonic Mania and Sonic Mania Plus, due to the player having the option to fight the Heavy King with any character in Encore Mode.

In the initial release of the PC version, the Denuvo DRM did not allow the game to be played offline.

This glitch was fixed in a patch released one day after the game's launch, allowing the game to be played offline after it has been run online at least once.

In the initial release of the PlayStation 4 version, accessing the leaderboards causes the game to crash.

This glitch was fixed in the 1.03 version of Sonic Mania.

In the initial release of the Nintendo Switch version, the HOME and POWER buttons were delayed, and accessing the Switch's quick action menu by holding HOME would randomly blocks access to the Switch’s UI entirely, forcing a hard restart.

This glitch was fixed in the 1.03 version of Sonic Mania.

Under certain circumstances after getting a 1-Up the "end level" music will play instead of the current level's theme. This causes the level's music to cease until it is changed (ie: a boss fight).

For unknown circumstances in a Special Stage, the UFO can abruptly turn around and fly towards the player, immediately rewarding them the Chaos Emerald.

If Sonic attempts to turn into Super Sonic, due to unknown circumstances, he may cease mid-transformation and stay stuck in his regular form. However, his quills and eyes will display similarities to Super Sonic, and other animations may change, such as the crouch. Sonic can still properly transform into Super Sonic after this. The theme music for Super Sonic will play when Sonic is in this state.

After defeating Metal Sonic in Stardust Speedway Zone, his collision with the spiked wall may force him to remain in mid-air. This is no longer present as of Version 1.04/RC 1.05.0713 due to the changes made to the Metal Sonic boss fight.

Similarly to Sonic the Hedgehog 2, if the player uses a Spin Dash or Drop Dash while riding the Tornado, it is possible to fall off and lose a life.

When playing as Sonic and Tails in the final boss fight, if Tails is grabbed by both hands at the same time, the player will be stuck in the fight and forced to either restart or get a Time Over.

It is possible to skip the Heavy Shinobi's boss battle with Sonic and Tails, by letting him freeze the Tails near the right-hand side of the stage to allow Sonic to bounce off of him. This will give the player access to the Capsule. As a side effect, the boss will continue fighting the player during the post-boss cutscene which can cause a softlock where the Phantom Ruby floats away.

In Flying Battery Act 2 as Knuckles, the player should go toward the end of the act where they run with anti-gravity spheres that push them upside down. From there, they should jump off while standing up and begin gliding. After some period of time, the player will perform somewhat of a level warp. The screen will scroll left, they will see inside assets with an outside background, and the ground will disappear. Afterwards, the player will be stuck at the far left of the stage in an invisible box.

This glitch is exclusive to PC. If the player activates the Developer Menu by opening the file located in the game's directory titled "settings.ini" with Notepad and adding the line "devmenu=y" under the "Game" section, they can access any level in Competition mode, including Egg Reverie, the true final boss. Going here will softlock the game unless they pick a different stage with the menu. Levels that are not meant to be played like this will not have a Goal Post or a way to finish the stage, so the player will be stuck there unless they quit or leave the stage. The player is prone to crashes when going to certain levels, like the leftover beta versions of Green Hill Zone and Studiopolis Zone. The Bonus Stages, Special Stages, and the pinball all load, but they are broken.

A glitch that can only be done in Encore Mode. It happens suddenly, but it mainly involves switching the player's character while they're jumping back on the screen. This will cause them to be an immense size, and will last until the end of the level.

If the player turns on Debug Mode and presses the button (depending on the system) to enter object placement mode at the exact second before the first cutscene in Mania Mode, they are able to use Debug Mode during the cutscene. This works on 1.04 version of Sonic Mania and in Sonic Mania Plus. They must place a Goal Plate and wait until the score summary finishes (if playing as Sonic, Tails, Mighty or Ray, they must make sure they do not exit out of object placement until the score tally appears; if playing as Knuckles, they must not exit object placement at all). Afterwards, they are taken to the actual Angel Island Zone.

The Zone is the same, but the background is missing (instead it is the ocean). Some textures also go missing. The Zone will correct itself once you go past the waterfall. The player can use Debug Mode, but if they go to the bottom of the stage and die, it will result in a Game Over. This is because the game thinks the player is in Encore Mode, and Encore Mode uses a different lives system (and the player does not have another character). If they go to the area where Mighty and Ray are, the ocean is replaced with an unfamiliar background. If they destroy the capsule without the Sonic Mania Plus DLC, Mighty and Ray will become Sonic (their trapped animations are still there, though); if they have the DLC, then everything is normal. They can pick a partner, but they cannot control them except when they place a Swap monitor. Once the player has full control, they should use Debug Mode to go the next cutscene. The player must be careful of going down Mighty's pathway though, as for some reason the player can get a Game Over. Once the cutscene plays, the player will go to Green Hill Zone with the companion they picked. However, if they skip the cutscene, they will go to the Encore version of Green Hill Zone and they can continue to play the Encore Zone (note that if they do this, even though the Zones will have the Encore palettes, the game will still think they are in Mania Mode, so monitors that are exclusive to Encore Mode are missing unless they place them with Debug Mode). The game can be beaten with any character and companion with the Mania or Encore Mode palettes.

Performing a Super Peel-out next to the set of spikes on the third oil carriage in Mirage Saloon Zone Act 1 will crush the player character.

In Metallic Madness Zone Act 1, in Encore Mode, if the player walks into the boss room with their companion behind in the background, when he is teleported to the boss room, he will be small and floating. The player can also perform this glitch themselves if they use Debug Mode when they are being flung back into the foreground, resulting in their character being shrunken down. Their hitbox remains the same, though, so they are actually bigger than they appear to be.

In Sonic Mania Plus, walking up to certain interactable objects from the left side (to the point that the player's character starts doing their pushing animation), charging up a Spin Dash, and then pressing left without releasing the spindash, the player's character will begin slowly moving to the left. It will not work with some objects, but the glitch can be consistently performed with spikes, vertical springs, and unbroken monitors.[3]

If the player looks up after beating the Laundro-Mobile in Hydrocity Zone Act 2, the characters will slowly come to a stop and will not continue to the next Act, and are stuck looking upwards. The only way to continue is to restart the game.

In Studiopolis Zone Act 2, if the player is Knuckles and glides past the first funnel in the Act, the player will see a set of bumpers. If Knuckles lands on the first bumper while gliding, he will fly past the second and third bumpers and eventually get stuck in the roof (The player can do this on any bumper, but they can do it on the first if they are familiar with this). While this happens, Knuckles' color sprite will move through the roof, but the player will see a half gray, half colored version of Knuckles' sprite with lines on it in the area where Knuckles was between the third bumper and the ceiling. After a while, the screen will shake rapidly, and Knuckles' entire sprite appears out of the roof and moves at super fast speeds towards the wall in the area behind the bumpers. This glitch can also be used as a shortcut to skip the first funnel and electric pipe.

On the PC version of Sonic Mania, if the player presses the Aux. button ([W]/

) while in a Special Stage, their Blue Sphere Gauge will increase. Repeatedly pressing the button will continue to increase the Gauge and the player's "speed level".