This article pertains to the beta elements from Sonic Mania.

During the early development of Sonic Mania in 2016, the game was originally known as "Sonic Discovery".[1] In fact, an early title screen from back then still exists in the game's files, which shows the full title of the game was "Sonic the Hedgehog Discovery."

In the PC version of Sonic Mania lies a secret developer menu that can be accessed by fiddling with the code. This menu was used by the development team to gain straight access to various aspects of the game. This menu includes:

In the data of the PC version of Sonic Mania, the sprite sheet with all of the Special Stage result screen headings has an unused sprite of the word "Hyper". This might indicate that at one point during the development of Sonic Mania, transformations like Hyper Sonic and Hyper Knuckles were going to appear. Due to the sprite being colored yellow like the "Super" headings, it might indicate that Tails was going to have a Hyper transformation too.

This boss is akin to the Gapsule from Sonic & Knuckles, being a boss secretly disguised as a Capsule, only to transform into a robot when the player presses the button on its underside. Once the boss battle with it begins, the Egg Janken will cycle through different Rock-Paper-Scissors combinations on its two screens. Below each screen is a letter; the left one says "S" for "Sonic" and the right one says "E" for "Eggman". During the battle, the Egg Janken will also hover left and right above the arena while protecting the button on its underbelly by swinging its iron ball arms back and forth. Should the player manage to press the Egg Janken's button, it will result in the robot reacting accordingly to the Rock-Paper-Scissors combination displayed on its screens when its button was pressed:

After hitting itself three times, the Egg Janken will explode, ending the fight. Compared to other bosses in the final version of Sonic Mania, the Egg Janken has the lowest hit-count of them all.

There is an earlier version of the Drillerdroid boss that exists in the game data and is designed for an earlier level layout for Lava Reef Zone Act 1. This version differs in that the drills are not plated in armor and do not have an active hitbox. When the boss drops in, it will drill in its position and cause an eruption that will not damage its armor, but will cause it to open to allow its systems to cool, exposing its weak point. It will then make the rock platforms collapse, causing the player to drop downwards.

The player will then have to goad the boss into landing in the approximate center of the lava pools to cause another eruption and expose its weak point. If it misses, it'll continuously drill on the spot before attempting to jump on the player again. The player must also watch out for the constant stream of fireballs that jump out of the pools. It takes six hits to defeat this version of the boss.

In the PC version of Sonic Mania, there lies an unused layout for Lava Reef Zone Act 1.[3] This layout deviates greatly from the final layout for this Act 1.

Unused sprites for Chaos Emeralds in the Bonus Stages.

Unused sprites for Super Emeralds in the Bonus Stages. 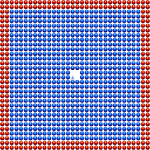 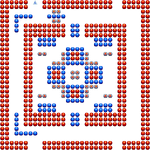 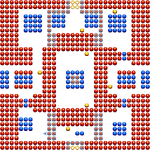 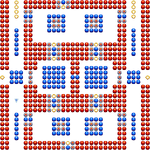 The DA Garden features an unused BGM track named "Egg Reverie Pinch Mode" (listed as #42), suggesting that it would have played if the player is either running low on Rings or is very close to beating the Phantom King and Klepto Mobile boss fight in Egg Reverie Zone. It is also featured in the game's Sound Test in Level Select as "2A"

These are beta elements that were unused at one point but were later added into the game or Sonic Mania Plus in some way or form.

In the source code of Sonic Mania, there are the unused animations and sound clips of Sonic yelling "I'm outer here" before he unceremoniously jumps off the screen, resulting in a Game Over. This is a callback to Sonic the Hedgehog CD, where Sonic does that exact thing if player hangs around too long idling. As of RC 1.05.0713, this animation is no longer unused as the animation for it is used in the redesigned main menu for the Exit option in the PC version only.

Both Sonic and Knuckles have special intros when entering this zone, where they react to a drop of Mega Mack falling on their heads. In Tails' case however, he does not react to it when it falls on him. In the game's files is an unused animation for this event, in which he reacts and blows off the drop with his twin-tails. While appearing to be finished, it is unknown why it went unused. this animation is no longer unused in Sonic Mania v1.04.

An updated version of the animation was later added in to Sonic Mania Plus, overwriting the sequence where it originally went unused.

In the game files, there are unused sprites of an unknown Badnik. This Badnik is designated as "Sweep" in the files. It is unknown if it is related to the Sweeper Badnik, an enemy that first appeared in Sonic Adventure. Whatever the case, it functions similar to the Amenbo from Tidal Tempest in Sonic the Hedgehog CD.

Sweep can be found in the object list for Chemical Plant Zone in Debug Mode. When placed, its vertical position snaps to the water's surface, and it skates back and forth while occasionally firing a spiked projectile from its nose.

Sweep was later added officially into the game in Sonic Mania Plus as part of Angel Island Zone.