The icon of Sonic Knight In Training.

Sonic Knight In Training[1] is an online Flash game published on the virtual pet website Neopets in February 2009. It is a sponsor game made to promote Sonic and the Black Knight before its release. The game was later taken down from the Neopets website after the sponsorship ended.

The player controls Sonic the Hedgehog, armed with Caliburn, in the center of an isometric corridor with crossroads pathways. Surrounding Sonic are the three main members of the Knights of the Round Table: Sir Lancelot, Sir Gawain, and Sir Percival. Each knight occupies one of the four paths, shooting damage-inducing apples at Sonic with a crossbow. The game lasts until Sonic is defeated, and the goal is to deflect as many apples as possible to achieve a high score. The player can rotate Sonic to face the left, right, or up, in which he will automatically deflect apples from that direction in close proximity by swinging Caliburn's blade. There are also apples displayed on the top of the screen that act as Sonic's health, and the game will end when the player loses all five.

Historically, if the player gained a high enough score, they would unlock a then-new trailer for Sonic and the Black Knight.[2] 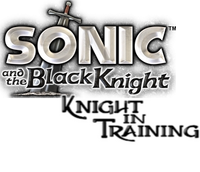 Sir Percival
Add a photo to this gallery

Click-to-play image
Add a photo to this gallery 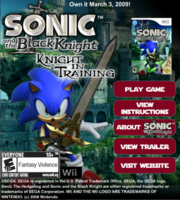 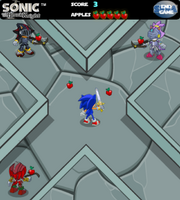 Sonic deflecting an incoming apple.
Add a photo to this gallery