Sonic Jump Fever is a mobile game developed by SEGA HARDlight and published by Sega in 2014 for iOS and Android devices. It serves as a follow-up to the 2012 remake of Sonic Jump. The game has been downloaded over ten million times on Google Play.[5]

Sonic Jump Fever was pulled from the iTunes and Google Play stores by the end of November 2018.

The gameplay is similar to that of other Sonic Jump titles. The objective of the game is to navigate a vertical course as far as possible until the time limit runs out. The player tilts their device to move the character left and right, and can tap the screen to perform a Double Jump. Hitting Badniks from below destroys them and scores the player points. The new feature of this game is the addition of a meter in the bottom right corner of the screen. Scoring points fills the meter and triggers a move called "Fever," which sends the player shooting upwards along a trail of Rings and orbs to collect. Actions that increases the Fever gauge include collecting orbs (yellow, blue and red) and destroying Badniks.

The time limit can be extended by passing through a Time Extend, but when it does run out, the player is automatically transported to a hot air balloon at the end of the level. The player is given one last chance to score points by flicking as many animal friends as possible into the balloon's basket.

Another new feature with Sonic Jump Fever is the Combo system. Combos can be earned by performing any action that increases the Fever gauge, and also includes the actions reaching past the Time Extend, destroying enemies and monitors and flicking animal friends into the balloon's basket. If an action is not performed within a short amount of time, the combo is lost.

Sonic Jump Fever is an energy based game. Each time the player plays through a round, one bar of energy is used up. The player can play up to 5 times in a row before having to wait for their energy to refill. It takes 25 minutes to fill one bar of energy which allows the player to jump again.

For every stage, there are preset leaderboards with randomly generated scores from the game's cast. By scoring higher than the bottom seven characters, the player will be rewarded 600 Rings when the zone changes. By scoring in the top 3, the player will be rewarded with 1000 Rings and the price for coming in first position are 1600 Rings. Each non-playable character score uses the Neutral/Normal Chao, no boosters and the specific playable character in the game, except for Cream, Rouge and Vector who use Sonic as they have not been added to the game, similar to inactive Facebook friends who have not yet scored during the current high score period. The characters sometimes move up or down one position when the leaderboard resets, but move back to their usual position for the following reset.

There are various Power-Ups in Sonic Jump Fever, all of which can be obtained by breaking item boxes in one of the game's stages. Each character has a set of four Power-Ups available to the respective character. Using Gold Rings, a character's Power-Up can be upgraded up to six times, strengthening the Power-Up's effect and prolonging its duration. However, each upgrade gets more expensive, starting with a price of 400 Gold Rings for the first upgrade, and reaching 30000 Gold Rings for the sixth and final upgrade. Each upgrade contributes to the Fever level. The higher the Fever level, the longer Fever lasts and the greater its rewards are. Fever can currently be upgraded up to level 14.

There are two more power-ups hidden in the game's files, exclusive to the unreleased characters Rouge and Vector, specifically the power-up "Target Enemy" for Vector and "Boost" for Rouge.

The following characters have been found in Sonic Jump Fever's files[6][7] and were intended to become playable via updates. Rouge can also be seen in the game's official trailer, and Vector was shown at a backstage preview event prior to the game's release.[8]

Sonic Jump Fever uses the same Zones featured in the 2012 remake of Sonic Jump (except for Mountain Zone). They changed every two days in the following order:

Assets for these Zones have been found in the game's files:

Sonic Jump Fever is entirely based around achieving the highest score possible and surpassing friends' high scores. Therefore, the game contains a system of Boosters, collectable Chao and Power-Ups in order to help the player earn greater scores.

By performing different tasks, each Booster extends the score in a positive way. While Gold Totem, Super Hoop and Animal Doubler can be bought with Rings, Power-Up Doubler, Quick Fever, Ring Streak and Super Time Extend can only be purchased with Red Star Rings. All kinds of Boosters, however, are obtainable in the Daily Spin and the Daily Reward. Up to three boosters may be equipped before a jump and each booster's effect lasts until the end of the jump.

Chao increase the player's score and performance. Each Normal, Rare and Super Rare Chao has its own unique ability. Chao can be found at the Chao Forest by shaking bushes. It costs 1800 Rings to perform a search, but Chao Searches are also sometimes available through the Daily Spin or the Daily Reward. Once found, they will stay with the player for a limited amount of time; however, if the player plays with the Chao, loyalty is awarded to the player. If loyalty is filled before the time is up, the Chao will be befriended and stay forever. Otherwise, the Chao will return to the forest, but can be befriended by spending a specific number of Red Star Rings, depending on the amount of loyalty that is already collected. 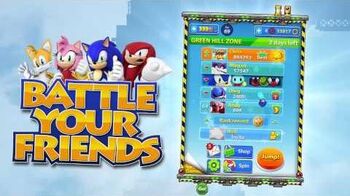 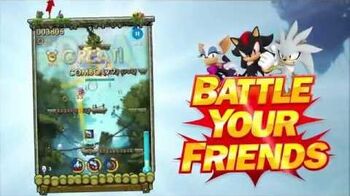