View source
watch 02:58
No Man's Sky Update - The Loop
Do you like this video?
Play Sound
Main page CreditsGallery

The app icon of Sonic Jump.

Sonic Jump, later renamed Sonic Jump Pro, is a mobile game developed by Hardlight Studio. It was released in 2012 by Sega for mobile applications and since the release, the game has had updates with new characters, zones and modes. It is the spiritual remake of the older mobile phone game with the same name. On March 2018, Sonic Jump became available online as a Facebook Messenger game.

Dr. Eggman kidnaps Animals, cages them in the prison unit of his Egg Mobile and flies with them high into the sky. When the chosen playable character witnesses the kidnapping, they decide to track down and stop the doctor to free the Animals from their prisons. In each Zone, Eggman is defeated by the respective character and he retreats, but not before capturing more Animals. After Eggman's final defeat in Mechanical Zone, the doctor is seen fleeing towards Cosmic Zone when something hits him and he crashes back on earth. The chosen playable character is then reunited with all the Animals.

Like in the original Sonic Jump game, the goal is to get to the Goal Plate at the end of each act by jumping up from one platform to another. Like normally in Sonic games, collecting rings will protect the player from Badniks or spikes. The only way the player can defeat Badniks is to attack their underside. However, if the playable character falls off-screen, the stage is restarted at the beginning of the act. Also, as the player bounces higher, the camera follows as well and does not scroll back down if the player does fall down. There are different types of platforms, as the more sensitive ones will collapse when the player jumps off or even step on them. Each playable character has their own abilities to survive from many situations.

In addition to normal rings, the game has three collectible Red Star Rings per act. The game has springs which bounce the player higher. There are also ring banks, which deposit the rings that the player has collected. With these rings, the player can purchase various items from the in-game store like characters, power-ups or wallpapers. The player can also pay to purchase more rings or characters.

The game has two modes: Story and Arcade. Story mode includes 48 levels, as each zone contains twelve acts and follows the game's plot. The story mode has also three bonus missions per act. The arcade mode is an infinite challenge, which only ends when the player falls or dies by hitting a Badnik or spikes. The player can challenge other players in Arcade mode to get the highest score on the leaderboards.

It was announced that the game would have free updates, including more playable characters and zones.

The following three characters have been found in the game's files. However, HARDLight have stated on Facebook that they have no plans to put additional characters in the game.[4] Despite this, they are all fully functional, although Cream is the only one whose unique ability has already been implemented. The files also indicate that Vector was supposed to be the next character, followed by Shadow and then Cream.

Arcade Mode contains endless versions of the various Zones which only end when the player falls or dies by hitting Badniks or other hazards without holding Rings. The player can challenge other players in Arcade mode to get the highest score on the leaderboards. Once a Zone is unlocked in Story Mode, it also becomes available in Arcade Mode. Each Zone comes with a preset leaderboard, consisting of height records from both playable and unreleased characters for the player to surpass. The preset leaderboards are the same for every Zone in the game.

Reception for Sonic Jump has been mostly positive, scoring 77% from Metacritic based on 13 reviews.[5] The game also scored a average 4/5 star rating on the App Store.

Reception for the Sonic Jump remake has been mostly positive. Pocket Gamer gave the game an 8 out of 10, praising it for being a "...tough, entertaining vertical platformer that has enough references and stylistic tweaks to make it stand out from the crowd".[7] Slide to Play gave the game a 4 out of 4, "Must Play" rating, especially praising the value in the game's free updates, stating "Twelve new stages and a new playable character adds up to a meaty chunk of content, and we're glad to see this excellent game get continued love from the developers. They even say advertise another forthcoming update in the game, and we're looking forward to playing that as well. Sonic Jump remains a great buy."[8] IGN gave the game a 7.5 out of 10, praising the game's "quality presentation and solid challenge" and that "the difficulty ramps up at a surprisingly fast pace...like the cutesy climbing equivalent of Super Meat Boy", but criticized Sega's approach to buying unlockables, saying that it takes too long to unlock by gameplay alone, and that buying one's way through the game destroys the competitive aspect of the leaderboards.[6] The game has also received many comparisons to the game Doodle Jump.[7][6][9]

The Sonic the Hedgehog comic series published by Archie Comics would adapt Sonic Jump for a story set in the Post-Super Genesis Wave timeline in Sonic Super Digest #5. 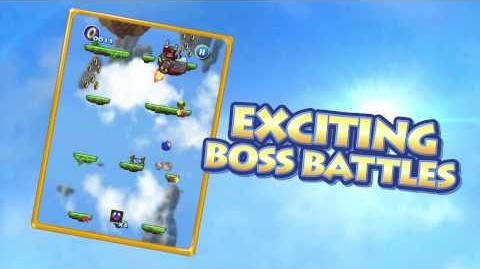