View source
watch 02:56
Raise a Floppa - The Loop
Do you like this video?
Play Sound
Main page CreditsGlitchesBeta elementsGallery

In addition to the re-released titles, the developers added new levels and the Sonic World feature, which are based on those from the 16-bit games in the Sonic series.

The games included in the compilation are as follows:

By selecting Sonic & Knuckles, the player can use the "Lock-on technology" from its original cartridge version in order to link up to the other three games in the collection, making the following games also playable:

Some of the port implementation is imperfect, however. In some moments, slowdown does occur where it did not in the original games. If too many sound effects are going on at once, the sound may glitch up as well. If the player crashes the game in debug mode of any game, the entire CD freezes as well. Finally, there are some additional graphical errors, most notably in Sonic the Hedgehog 3 & Knuckles - if Knuckles manages to trigger Dr. Robotnik as his opponent in Mushroom Hill Zone, the fought character will use both Robotnik and EggRobo's sprites.

Sonic World was originally an early build of Sonic Adventure after Sonic Team had decided to shift the development into the Dreamcast.[3].

Sonic Jam received generally positive reviews, holding an aggregate score of 77.55% at GameRankings, based on four reviews.[4] The Sonic World was compared by many to the likes of Super Mario 64.[7][10]

Lee Nutter of Sega Saturn Magazine in the United Kingdom gave the game a 92%, praising Sonic World above all else by saying that it "features some of the most astounding graphics witnessed on the Saturn."[12] The next month's issue of the magazine would then come with a demo CD featuring Sonic Jam alongside Sonic 3D and two other games.[13] Electronic Gaming Monthly would also cite Sonic World as the game's best trait, though they wondered why Sonic CD had not been included in the compilation.[6] 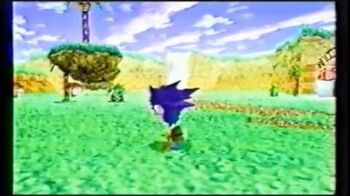