Sonic J is a mobile action 2D platformer game developed and released by Sega in 2001. It is quite similar to the 2001 Sonic Cafe Sonic the Hedgehog game, as both feature minimal graphics and a simple Zone.

In Sonic J, the player plays as Sonic running though the available Zone while collecting Rings.

The top of the screen displays a Ring counter on the left and a timer on the right.

Sonic J was first announced at the JavaOne press conference on 7 June 2000 by Sega and Motorola, as part of a deal between the two companies that would see the former produce several J2ME-based games for the latter's new cellular phones.[3][4][1] Several other games were announced as well, including Sonic's Bomb Squad, Sonic Head On and Sonic Logic.[1][4] 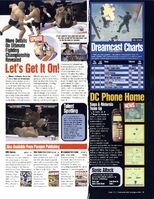