Sonic Heroes Puzzle is an online Flash game released in 2004 to promote Sonic Heroes. The game appeared on the Sonic Heroes game websites before they were later shut down.

In 2005, the game was republished on the 4Kids TV website under the names Sonic Puzzle[1] and Sonic Stackers.[2]

Sonic Heroes Puzzle shares similar gameplay to other action puzzle games such as Tetris, Dr. Mario, and Baku Baku Animal. The player must stack blocks and clear them with the corresponding items, earning points while doing so. There are six different blocks, three types associated with their corresponding power. The more points the player scores, the faster the blocks fall. Power meters are filled through gaining points, in three ways of Sonic's power, Tails' power and Knuckles' power.

The game types are divided into two; Freeplay and Timer mode.

Each character between Sonic, Tails and Knuckles earn points in certain combination chain of items: 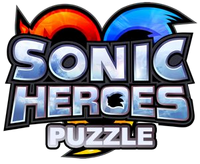 4Kids TV game icon
Add a photo to this gallery