This article pertains to the beta elements of Sonic Heroes.

In the game, each character would mention the team formation that is needed to be in control at different points. However, in the game files, some voice clips indicate that they were going to mention the formation by calling out the teammates' original names.

There are quotes that were supposed to be used by Neo Metal Sonic during Robot Storm or Robot Carnival. All of them are insults to each team.

Note: The full transcript for the first line is actually "Try coming back in about a million years, then you might have a chance!" The line gets cut off at "years".

Two unused Japanese voice clips for Shadow can be found in the English voice files.

Every character that is caught under a Weight will say something to describe what they feel when getting slapped by this gimmick. However, the lines they say are different from some written in the game files. This difference also goes when caught by Klagens, but they have lines of when they get teleported from the Golden Klagens.

When a character is unavailable, they will be waiting inside a checkpoint. However, they are silent in the final game.

In the game files, there are hidden lines about a gate that belongs to Omochao.

In Battle, each opposing team can use Team Blast without any specific time limits. However, in the game files, each team seem to know when their opponents will use their Team Blast, and will order their teammates to take down one of the opponents to stop the move. This is rather pointless, as it will not prevent the Team Blast.

In the game files, there are also unused quotes for all the characters, beside the Speed Type characters, that describe what they feel about the battle.

According to some quotes in the game files, Metal Sonic was supposed to have some invisibility power.

Both Team Rose and Team Chaotix use shortened/modified versions of Team Sonic's and Team Dark's Stages. However, within the game's files, one can find several lines said by both teams which are referencing areas within the Stages that are not accessible by normal means. Interestingly enough though the aforementioned lines are actually still left implemented into the gameplay and can still be discovered through glitches/exploits that allow the player to reach these further sections of the Stages where they are located.

Team Rose and Team Chaotix explain how their Team Blasts work. The only point in the game in which this is said is on the final whale island in Seaside Hill, which is not a part of the stage for these two teams (the voice clips here are from the GameCube version).

Team Chaotix's Power Plant Stage ends before the rising lava room, but there are voice clips recorded for when the lava rises. Although it is possible to get in via glitching, it only has a spring, a grate, the final vertical door and nothing else. The voice clips do not even trigger.

There are two clips that indicate that there was supposed to be sections in Rail Canyon where Charmy has to leave his teammates behind.

Team Rose is the only team in Sonic Heroes without chase parts, so some comments go unused.

There are some comments that Team Rose were meant to say after being shot out of the second cannon in Bullet Station. However, that part does not belong in the final game. To top it all off, Amy's voice clip is empty. However, the subtitles still read "Phew, that was something else". It is also said after falling into the underground tunnel.

Team Rose's underground tunnel comments have been replaced with the second cannon comments instead, so these are unused.

Team Rose's Casino Park ends before the V.I.P. room area, but there are still lines recorded for it. These lines can be heard by utilizing glitches to access the area.

In Hang Castle, Team Rose has to open the door with a switch, so some comments go unused.

In Mystic Mansion, even though Team Rose can never get to the trials in the pocket dimension, there are voice clips for it.

Even though Team Rose can never get to the three type trials in Mystic Mansion, there are voice clips for how to get past the Speed trial.

There exist unused, alternate comments for when Team Rose is landing on a battleship in Egg Fleet in the game files.

There is a section in Final Fortress where some of the Egg Hammers and Heavy-Egg Hammers gather for the arguably hardest non-boss fight, as well as the last one. There is a Hint Ring nearby suggesting the use of Team Blast. Team Rose's stage ends before this a bit, but there are still recorded lines in the game files for the team's Team Blast hint.

The self-destruct switch from Final Fortress was replaced with a fan instead, so some comments go unused.

The laser cannons from Final Fortress were seen but they didn't activate, so some comments go unused.

Through hacking, a number of objects were left out of the levels due to some reasons such as bugs and whatnot. These include:

The fireworks object that was intended to be used for the Casino themed levels was not used in the levels. If they are loaded, they will trigger explosion sounds, albeit the animation is not in a smooth rate as regularly rendered in-game. When a player heads away from them, the game will crash.

One of the relocatable files contain the lines displayed during FMVs. The text includes descriptions of various sound effects marked as "(ES)", for example, "(SE) scattering stuff falling of the desk", "(SE) Machine gun fire" or "(SE) Explosion".

Amy and Espio had their original tornado jump ablities when the game was under development. These were replaced with their own tornado jump attacks after the developers came up with the ideas of Tornado Hammer for Amy and Leaf Swirl for Espio. In the E3 build, the leaf particles emit even though Espio had his original tornado scrapped. The tornadoes also play the following voice sound effects that go to these attacks:

Although the invisibility was programmed for Espio exclusively done using Leaf Swirl and not any other Tornado Jumps, the rendering of other speed characters through it are not used and enemies and frogs will still detect them. Amy's hammer however is also completely invisible. However, on the PC version the rendering function only renders the model if the player character is Espio.

While the game was under development, Amy was able to cling on walls with the Triangle Jump with the running animation being used. However, the developers decided to revoke Amy's Triangle Jump maneuver in the final game.

While Sonic and Shadow have the Light Dash in their moveset, the move was locked for Amy and Espio's moveset maneuvers in the final game. Like with Amy's wall cling, the running animation was used as a filter to prevent the game from crashing.

Renders for the Unidus and the iron balls used by it is present in the game files.

When fighting Metal Madness, the Hint Ring at the right makes Team Rose say that the boss will shoot fire if you grab his right arm. There is also an early image for the PlayStation 2 version of the game which shows that Metal Madness was originally going to have a white lower body.

Seaside Hill and Grand Metropolis from Action Race, as well as Rail Canyon from Expert Race, have unused content past the Goal Rings posted. Most of the areas past the initial Goal Ring appear to be copied over from 1P mode and includes a fully functional Goal Ring at where these stages would normally end in story mode. Why the stages were cut shorter than normal remains unclear, as all objects are still loaded and can be seen using debugging tools and movements. It is worth noting however that the background does not appear to extend far past the initial Goal Ring placed. In addition, there is no ground loaded anywhere. There is also no death flag loaded for the bottomless pits past here, so a player can fall infinitely into a void. To land safely without falling into the void, one would need to land on top of a flat object, like a cage or breakable box. All Egg Pawns (with the exception of the Egg Bazooka-wielding Egg Pawns) will immediately fall into the void once they begin to move.

A debug menu can be accessed using Action Replay codes. With the debug menu, a number of options can be enabled.

2P stages can also be played. It should be noted though that the same team cannot be selected for both players. Otherwise, the game crashes.

Several changes were made to the game's cutscenes between the final version and the prototype version shown at E3:

The camera is not fully functional in a few minor places and tends to get slightly locked in some instances. This does not occur everywhere, but it is noticeable, as the angle becomes awkward. In some places, the camera is a tad different too, being closer to the characters, almost as if the no pre-scripted camera was present. 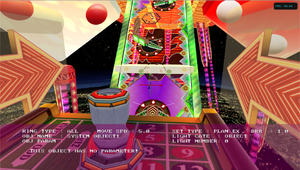 As a reward for pre-ordering "Mario Kart: Double Dash!!", customers received a bonus disc containing demos and videos of various upcoming games. One demo was Sonic Heroes, which contained some differences from the final version.

An in-store build (similar to the retail, but not the kiosk builds that were also playable) that was playable in Walmart has the file selection screen (normally accessed from the title screen) replaced with a Battle screen. Selecting any side however, navigates to the main menu with the same features as normal.

Early revisions of the songs in Sonic Heroes popped up on the internet before the game was released:

Debug Team
Team ForEDIT is a leftover group that is inaccessible without access to the debug menu[7] in Sonic Heroes. It was discovered through hacking on the PC version of the game.

During the development of Sonic Heroes, the team was originally used to edit/test levels when creating levels for each team. Aside from debugging, the team involves members from the Chaotix except that Big the Cat is in place of Vector along with level layouts from Team Sonic outside of Super Hard Mode which Espio the Chameleon cannot perform the Light Speed Dash technique in certain areas with ring paths in-order to move on to somewhere else in the level and the characters are voiceless aside from Hints and it's collisions.

A few side effects when playing this team on level cutscenes, boss level cutscenes, 2 Player races and Emerald challenges include crashing, the first rival boss can properly be loaded albeit Team Sonic will be fought except that Team Dark's name and icons are loaded, the mission text does not appear on the level loading screen in single player mode and using Team Blast results a black background with Espio and Charmy playing the instruments and Big dancing. Also, there is no way to escape from it requiring the player to restart or quit the level in-order to get out of it.

The team selected in the level selection debug menu.