Sonic Golf DX (ソニックゴルフDX, Sonikku Gorufu DX?) is a mobile phone game released as part of the Puyo Puyo! Sega service offered by Sega. The game was released in June 2010 in commemoration of the Sonic the Hedgehog series' 19th anniversary.[1] It is the sequel to Sonic Golf 3D, which it serves as a graphically enhanced remake of.

In Sonic Golf DX, the player takes control of Sonic and his friends as they play golf. The player goes through a nine-hole course. Good shots earn Rings which can be used to purchase additional clubs, balls, accessories, special shots, and playable characters. In addition to the normal game, there is a training mode and download shop for swapping out courses. Much like in Sonic Golf 3D, the game also has an online ranking; when earning high scores, the player can upload them onto a national scores table. 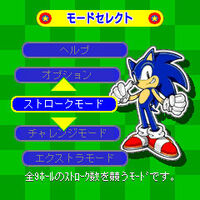 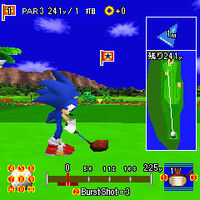