Sonic Golf C-Mode Cup (ソニックゴルフ Cmodeカップ, Sonikku Gorufu Cmode Kappu?) is a mobile phone game released as part of a joint event between Sega with Coca-Cola Japan for the Sonic Cafe service in 2002.[3] It is based on the original Sonic Golf, being identical other than the title screen and contest-related text.

To play the game, it was necessary to also install the Club Cmode app, with this being run by Coca-Cola Japan, Docomo, and Itochu. "Cmode" itself is a prepaid vending machine system, from which drinks can be purchased by scanning a QR code on one's mobile phone.

The game was first available on 9 September 2002 through Sonic Cafe.[1] The first event ended on 8 October 2002. On 25 November of the same year, a second event was held before the game became unavailable on 25 December 2002.[2]

The player plays half a round, or nine holes, of golf. The score for the hole and the overall score is shown after completing a hole. The final score of the round could be shared on the Sonic Cafe leaderboards.

The in-game score would result in "Cmde points," which were each worth ¥1, at the maximum score of 1000 points. It was possible to exchange the Cmode points for a free beverage from Cmode vending machines. 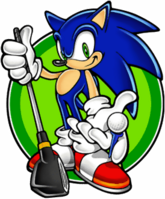 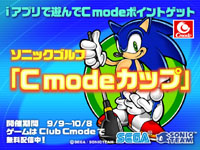