Sonic Ghost Shooting is a game attraction in Sega's Tokyo Joypolis that was released 27 July 2013 in Japan.[1]

The attraction is an interactive dark ride where players must use light guns to shoot as many ghosts as possible to gain the highest score. Up to twelve people can play at once, with two people per car.[2] 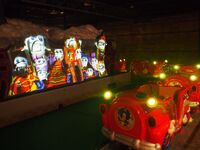 CG image of the attraction
Add a photo to this gallery