This article pertains to the beta elements of Sonic Generations.

According to a leaked correspondence, Sonic Generations was meant to be made as part of deal between Sega of America and Sony Corporation of America for their consoles under the original working title "Sonic Anniversary." Also, back then, there were not additional ports for the Xbox 360 or PC. However, later sources from Madrid’s Gamefest 2010 confirmed that the game was meant to be a combination of 2D and 3D gameplay, and would have been developed for the Wii, PlayStation Portable, PlayStation 3 and Nintendo 3DS. When asked about whether or not it was planned for the Xbox 360, the employee indicated that talks were still going.[1]

With the game's official release, it is uncertain how far the Wii, PlayStation 2 and Nintendo DS versions got in development, though sources suggest that they were cancelled early in said development.[1]

On 25 May 2017, the video game preservation group Obscure Gamers obtained a debug backup disc of the PlayStation Portable version of the game dating back to November 2009. The disk was damaged with recovery seemingly impossible; however, 14 MB of data would be saved.[2] In July 2020, along with the announcement that the majority of the data was lost, some images of basic UI assets were revealed. These included the logo for Sonic Anniversary, PSP button prompts, a debug menu, and an image from a level, possibly Mushroom Hill.[3] 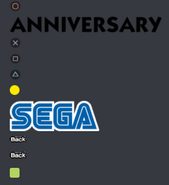 In an interview with Ryan Drummond, it was revealed that a third version of Sonic representing the Dreamcast era was planned during the early development of Sonic Generations. The role of voicing this Sonic was offered to Drummond, a former voice actor for the character, but he turned the offer down.[1]

According to Aaron Webber, Sega had considered that Jaleel White should have voiced Classic Sonic. However, due to the idea of Classic Sonic having a voice being dropped early in development, and many insisted that Classic Sonic should remain mute, White was never contacted and the idea was scrapped.[1][4]

At some point, the Orange Rocket and Pink Spikes were going to work in every stage as equipable Skills. However, this idea was scrapped in the final version of the game, although text descriptions of these Skills remained in the game files:

Relating to the Character Sections of the Gallery Room, with fourteen characters each having their own biography. However, text files for Super Sonic also exist as well.

"The name give to Sonic's ultimate form when he is transformed through the power of the Chaos Emeralds. Sonic is more powerful than normal as Super Sonic, but he can remain so for only a short time due to the tremendous amounts of energy required."

The game holds a few unused jingles and an earlier version of the Green Hill HUB song. The first jingle would have played when Modern Sonic got Invincible. While this is unused in the console version, the tune was implemented into the Nintendo 3DS version of the game. The second is a unused jingle for when obtaining a 1-Up, which was also unused in Sonic Adventure.

The environment map for Planet Wisp is made of screenshots shot with Sonic Team's developer program. The six parts of the image, when assembled together to form a cube, all show Sonic running through the air in a nondescript location in Planet Wisp. Just below his feet is a ball made of red wires, which indicates the use of a 3D rotation tool. In addition, the last two sides are duplicates of the first two.

While the PC version of Sonic Generations did not include the Sega Genesis Controller in the final game, the game files still holds its HUB song and shop icon.

In the game files, there are some mission objectives that never got into the game. Those include:

Note that these mission requirements are used in the 3DS version of the game.

Despite the fact that Sonic Unleashed did not get a PC port, Sonic Generations' PC version has a lot of leftovers from the said game:

There are also several icons for Sonic the Hedgehog and Sonic the Werehog still in the game, like the Werehog's 1-Up icon.

In one of the Time Eater's game files, there exist several mirrored images of the characters' names in different languages, each printed on a color header matching the characters' primary color scheme. These images even include headers for Metal Sonic and Omochao, even though neither of these characters appeared for the final boss battle.

There are unused friction/acceleration/velocity-related settings for ice surfaces in Sonic Generations. Curiously though, there are no ice-themed Stages in the game.

There is an unused option that can change the Homing Attack's button to "X". But if this option is set to "true", the Homing Attack can be performed by pressing the "X" button, although it will disable the Jump Dash for both Classic and Modern Sonic. Also, the player will be unable to Double Jump when equipped with elemental shields.

The Foot Sweep from Sonic Unleashed exists in the Sonic Generations game files, but is unused. If a user reactivates it, Sonic will be able to utilize it in gameplay. However, the move seems to be incomplete as it does not create an aura when used and causes enemies hit by it to freeze up and then break apart without displaying a destruction animation.[6]

Friction/acceleration/velocity settings related to ice surfaces. However, since there are no ice-themed levels in the game, these settings are unused. They can be used and restored through mods.

Text indicating that the player could at one point change

to be the Homing Attack (and also do an Air Dash), just like in Sonic Unleashed. The same thing also goes for Classic Sonic, but must have the Homing Attack Skill unlocked from the Shop. However, he is then unable to activate the double jump ability of elemental shields, which is possibly part of the idea of why it was scrapped.

There are a number of unused animations that were meant to be used for the Time Eater boss fight. Interestingly, there are boost bars that are either empty or being filled up:

The Sonic Generations Demo was a playable version of Sonic Generations released for Gold members on Xbox Live Arcade and PlayStation Network users on 23 June 2011. Free Xbox Live members were given the game a week later on the 30th. This demo included Green Hill Act 1.