No to be confused with Drift.

Sonic Drift (ソニックドリフト, Sonikku Dorifuto?) is a kart racing game in the Sonic the Hedgehog series that was developed and released by Sega for the Sega Game Gear. Initially released on 18 March 1994, the game remained a Japan exclusive title until it was included on compilation releases years later. The game features Sonic, Tails, Amy, and Dr. Robotnik in racing vehicles as rally contestants, with the basic gameplay deriving from standard, early 1990's racing games. The game also received a sequel, Sonic Drift 2, which had an international release.

At the start line of a race, Dr. Robotnik is driving his Egg Typhoon and bragging that he is the greatest scientist in the world. The doctor is interrupted by Sonic the Hedgehog, who has come to participate in the race as well, saying that he will compete with his car rather than on foot, although he adds that he will win either way. Then, Miles "Tails" Prower comes in too, saying that he is a little confident and will try his best. As Robotnik scolds them for interrupting him, Amy Rose appears in her new car, the Breeze. However, she and Tails notice that Sonic has already started the race, and so the two go after him. Robotnik, meanwhile, brags that he will win, only to realize that no one is with him.[4]

After choosing a racer, the player has to lead them through three Chaos GPs: Green, Yellow, and Red. Depending on the character chosen, they will be taken to an ending cutscene after beating all three GPs:

Sonic Drift is a racing game with a gameplay style and controls that are heavily based on Sega's arcade game Out Run. Here, the players race around a race course against the other three characters for the top position. The game's single player mode is Chaos GP, where the player's goal is to win three different circuits: green, yellow, and red. Each circuit is made of six different race courses that the player is taken through in succession.

Each race course is composed of a circuit which needs to be completed three times. The playable characters have rather simple controls, their basic actions being accelerating to move forward, braking, and moving left or right on the tracks. In tight corners, the player can brake while turning in a specific direction, allowing them to drift through the corners. If the player overuses this method though, the playable character will start spinning out of control. Should the player move outside the race tracks, the racer's acceleration will decrease noticeably on the rough terrain. The race track's sidelines also have obstacles that will stop the player altogether if the playable characters crash into them. The player can also collect Rings along the race tracks to perform special moves that are unique to each character.

At the beginning of a Chaos GP circuit, the player starts out from the fourth place, with that being the lowest position. Upon completing a race course though, each racer is awarded with points based on their finishing positions, allowing the participants to improve their place. The points given are as follows:

At the end of a Chaos GP circuit, the racer with the most points wins. If there is a tie for total points, the racer with the most 1st-place finishes wins. When winning a Chaos GP, the player is awarded with a Chaos Emerald. If the player does not receive first place on one of Chaos GP circuits however, they have to start over. Completing the red Chaos GP in first place awards the player with a small ending cutscene related to one of the four playable characters, which is then followed by the game credits.

In Sonic Drift, different items and power-ups lie scattered across the racing tracks, which the player can collect to help improve their performance during a race. These items respawn after each lap on a track.

Sonic Drift features four playable characters, each one playing quite similar to each other, but featuring their own strengths and weaknesses. Each of them has a special power that can be utilized during the race to improve their performances or hinder their opponents. After choosing a character, the remainder become the opponents for the Chaos GP.

Free Run is the basic Time Attack mode of Sonic Drift that allows the player to replay any of the race courses with goal of getting the fastest record possible. On the menu screen, the player can choose the race course and playable character and then start the race with the "Run" option. The separate "Results" option shows the three best circuit times and the single best lap time.

Versus mode is the multiplayer aspect of Sonic Drift, which features gameplay for two players. To play, players has to connect two Game Gear handheld units with two Sonic Drift Paks using one Gear-to-Gear Cable (VS Cable in Japan). The Versus mode consists of a gameplay similar to that in the Chaos GP which include the same features and has all the race courses available.

Sonic Drift received mixed to negative reviews from critics. On release, Famicom Tsūshin scored the game a 23 out of 40.[3] In December 1994, Mark Hill of Sega Pro criticized the "sense of anticlimax [that] hits you almost immediately" once starting a race, saying that "pretty graphics and modest sounds don't compensate."[9]

When the game was included in Sonic Mega Collection Plus, Gamespy called it "almost unplayable",[11] while Eurogamer called it a "terrible, terrible racing game whose flickering madness actually made me physically sick."[12]

Despite its scores, Sonic Drift was commercially successful and received a sequel, Sonic Drift 2, which, unlike this game, was released internationally.

In Japan, Sonic Drift was sold bundled in with the Game Gear. For many years, the game remained Japanese exclusive until it was included as an unlockable game in Sonic Adventure DX: Director's Cut, which marked the first international release of the game. To unlock it, the player must collect forty emblems or complete forty missions. It was later ported for compilation games such as Sonic Mega Collection Plus. Sonic Drift was also one of Sonic the Hedgehog games to be available on the online video game service "GameTap" up until 2009, but the service has since been discontinued.[13] 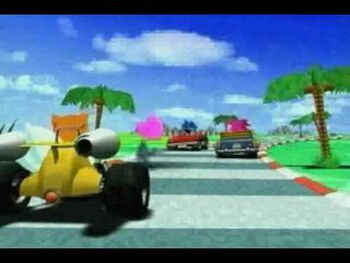 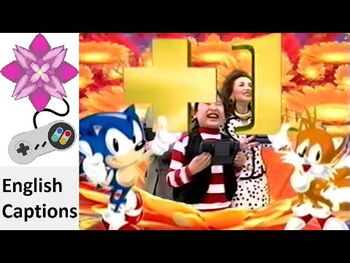