View source
watch 02:46
The Quarry - The Loop
Do you like this video?
Play Sound
Main page GlitchesGallery

You may be looking for Sonic Dash Quiz.

How far can the world's fastest hedgehog run?

Sonic Dash is a video game in the Sonic the Hedgehog series. It is an endless runner mobile game developed by SEGA HARDlight and released by Sega in 2013. As with most games of the genre, Sonic Dash has gameplay based off of that of Temple Run, in which the player controls various Sonic the Hedgehog characters while racing across various locations of the series and fighting bosses.

Sonic Dash received mixed-to-positive reviews, praising the gameplay mechanics and beautiful graphics, but criticizing on the game's repetitiveness and frequent crashes. With over 400 million downloads worldwide, Sonic Dash has become the most downloaded Sonic game ever.[1]

A sequel, entitled Sonic Dash 2: Sonic Boom, based on the Sonic Boom franchise, was released on Android on 1 July 2015.[2]

Sonic Dash is an endless runner; it is very similar to the gameplay of the Temple Run and Subway Surfers video games.[3] The player directs their selected character through never-ending 3D Zones with three different spaces, moving forward at all times. The goal is simply to run as far as possible.

The tracks in Sonic Dash are full of obstacles the player has to avoid. To avoid obstacles in the character's path, they can Jump, Roll, and use the Quick Step. Some obstacles that can be found include bottomless pits and Badniks, the latter of which can be destroyed with a Roll. Some bottomless pits can be very large and extend towards the three spaces. In these sections, the camera will move much more slowly and the character will have to Homing Attack their way through some Choppers that will appear.

Rings play a critical role in the game. Like most other Sonic games, they can be collected across the tracks and can be used as currency in the main menu or as a method of protection in the Zones themselves. When Rings are collected, the Dash Meter at the bottom of the screen fills, and when it is full, the player can perform the Dash Boost, in which the character automatically blasts through obstacles. When the character hits a Badnik without Rolling, a Bomb or a set of spikes, while carrying at least one single Ring; the player will lose all of their Rings, making them vulnerable to obstacles of the same kind. Touching those same obstacles without having a single Ring will end the game. However, Rings cannot protect the player from most obstacles such as pits. In addition to the normal Rings, the player can encounter Red Star Rings, albeit very rarely. These are purely for currency, and do not play the same role Rings go within the game.

At certain points, the player will encounter three different Springs with screens above them. Once they touch a Spring, the character will have all of their Rings banked automatically, and they will have to perform a certain combination of four tricks by sliding their finger towards a requested direction, akin to Trick Actions. Doing so successfully will award the player ten, twenty, thirty, fifty, or even one-hundred Rings, though ten and twenty Rings are by far the most common. Failing to perform the tricks, however, will not award the player any Rings and leave them vulnerable to certain obstacles until they find Rings. In addition, touching the Springs will affect the game depending on the screen they have, and thus can send the player to another Zone, add loops and corkscrews to the Zone they are in, or fight a boss.

As the player progresses, they will be able to collect Animals, which are obtained by destroying Badniks. Once the game ends, the player will be able to claim the collected Animals and use them to unlock new buildings to construct throughout the Zones. These buildings, however, can only be completed by collecting Gems through a variety of means. As the player completes the Zone, a gauge will be steadily filled and grant them different awards and a character when filled. In addition, certain characters are able to double the amount of certain Animals they have collected to make it easier for the player to unlock new buildings.

In addition to the standard game, the player can equip their character with different Boosters and power-ups to collect points more easily. These Boosters are obtained through certain means, and can be equipped on the title screen. In addition, when the game starts, the player can use a Headstart or a Super Headstart to boost through the Zone for a short period of time, akin to the normal Dash Boost.

Each character has an unique upgrade profile, allowing the player to improve their performance during a run. There are five different upgrades per character, and each upgrade rewards XP for the player's Score Multiplier.

Sonic Dash currently has seven different Zones. Each Zone will appear in a ruined state when first unlocked, and can be restored by collecting Animals and using Gems. Rebuilding a Zone will reward the player at set milestones various items, including the Zone's respective character. The final upgrades have three options, the last being more expensive and usually more unique. The player will begin a run in the selected Zone.

In a November 2012 interview with the UK toy trade magazine, Toys 'n' Playthings, Sega Europe employee Sissel Henno confirmed that Sega would have "several new digital titles" in 2013.[6] On 28 February 2013, the title Sonic Dash was spotted on a listing from a LinkedIn profile.[7] On 1 March 2013, Sega confirmed the game,[8] with an official press release going out on 4 March.[9] The game was announced to be on iOS, while the Android version would exist only in rumors that it would be ported since SEGA HARDlight's Chris Southall said it would remain a possibily. It would be difficult to port the flexible iOS Unity 3D engine into Android, similarly to the experienced problem of porting Temple Run and its sequel. In addition, Android development also took a long time because of newer devices requiring testing and development before getting it released.[10]

On 19 September 2013, the official Sonic the Hedgehog Facebook page announced that Sonic Dash might come out on the Android "soon," with a tentative date of fall 2013.[11] However, SEGA HARDlight's Facebook warned players that there was a fake version that was not developed by themselves.[12]

The soundtrack of Sonic Dash consists of remixes and reused tracks from past games for the most part. The theme that plays in the main menu, for example, is a remix of the track that plays in Blue Sky Zone in Sonic Jump and Sonic Jump 2; while the track that plays in Seaside Hill Zone, Beach Zone, Green Hill Zone, and Temple Zone is a remix of "STAGE 1 : SEASIDE HILL", the theme of Seaside Hill from Sonic Heroes. The tracks that have been reused from past games are:

Sonic Dash was first released on 7 March 2013 for iOS phones with costing $1.99 in the United States and £1.49 in the United Kingdom. Since 29 March 2013, it can be downloaded for free. It was later released on 26 November 2013 for the Android on Google Play. At its release, the Android version was caught up with the then-current iOS version, having all of the features the iOS version currently has except for the iOS-exclusive Game Center. On 11 March 2014, the game was released for Android devices on the Amazon App Store.

On 3 December 2014, Sonic Dash was released for Windows Phone 8 and Windows 8.1. It has every feature of the Android and iOS versions except for recording gameplays and Google Play Games/Game Center.

Sonic Dash has received mixed to positive reception, holding a score of 69% on review aggregator Metacritic based on 26 reviews.[16] In the Apple App Store, the game holds a score of 4.6 out of 5 based on ~20000 ratings.[25] Much of the game has been praised for its graphics and other controls. But its in-app purchases, according to Destructoid,[17] range from "not needed" to "pretty damn annoying."

IGN gave it a 6.1 out of 10, praising its gameplay and controls but criticizing its "pay-to-win elements" and the amount of "unavoidable deaths."[22] According to Eurogamer, "The randomly-generated zones are filled with classic obstacles and enemies zooming towards you at an ever faster rate, and are showed off by some fantastic camerawork as Sonic zooms through long, twisting paths and loops. Rings are everywhere, which protect Sonic from a single enemy hit but not a collision, and can be 'banked' between zones to gradually level up the hog," although it finds "the entire game is framed and ultimately spoiled by in-app purchases," referring to the aggressive use of in-app purchases in the game.[19] 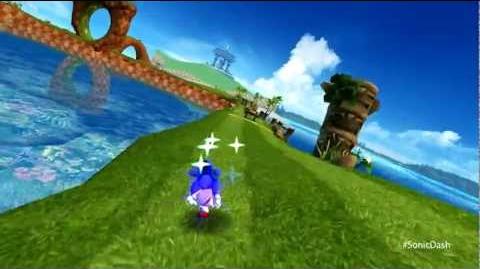 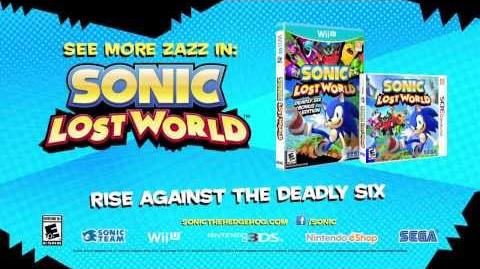 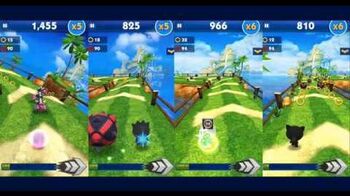 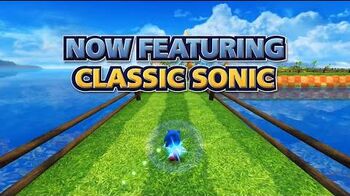 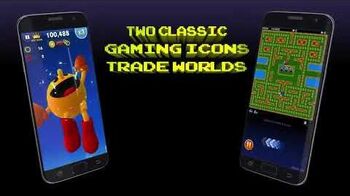 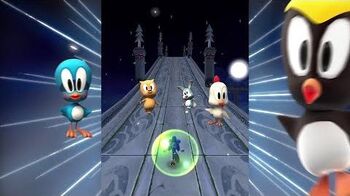