Sonic DS is an unreleased game for the Nintendo DS. It was shown during the May E3 convention in 2004. The UK-based Official Nintendo Magazine ran a piece on the game which praised its visuals as being the best on the DS, but also criticized it for having basic gameplay. The magazine compared it to being the Nintendo DS equivalent of the 100 meter button dash. Eventually the game was cancelled and Sonic Rush became the first Sonic game for Nintendo DS.

After the player reaches a certain speed, the screen will say "SONIC Speed 1" and everything on the screen except for Sonic will have its colors inverted. There are multiple levels of "SONIC Speed" that the player can get by going even faster.

On the upper screen, the player can see the number of Rings they have collected, the "Highest Record Today", and "Your Record" which is just the timer.

When the player reaches the finish line, they get given a rank according to their SONIC Speed, Rings, and Time, and a splash screen pops up that exclaims "Keep an eye out for SEGA's titles on the DS!" 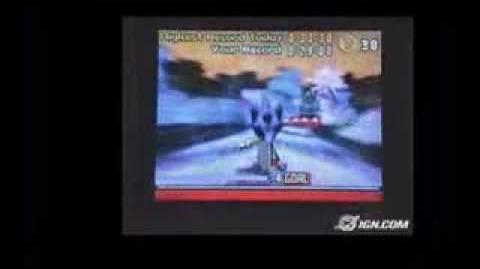