Sonic Cricket is a mobile game developed by the Indian developer, Studio Lakshyaby, and published by UTV Indiagames in cooperation with Sega. Released exclusively in India, the game was a part of the Sonic 20th anniversary celebration.[1][2]

In Sonic Cricket, the player controls the members of Team Sonic as they player a standard game of cricket.

Sega Corporation's mobile department manager, Kaoru Nagai, said that their "association with UTV Indiagames reiterates [their] commitment to spread the Sonic brand to the users in India. Launching Sonic Cricket will definitely be considered as one of [their] breakthroughs as 2011 is Sonic's 20th anniversary and bringing together the character with one of the most played games in this country, will definitely add to our celebrations."[2]

The music featured in Sonic Cricket is the soundtrack of the original Sonic the Hedgehog.[2] 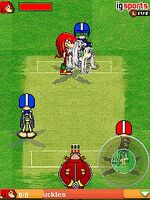