The title screen of Sonic Crackers.

Sonic Crackers, also known in the ROM header as Sonic Studium (the misspelling of Sonic Stadium[4]), is an early prototype of a Sonic the Hedgehog game for the Sega Mega Drive. It is believed to have been an engine test, containing essentially multiple different game engines, swapped out in real time using code written into RAM. The game is viewed as a prototype of Knuckles' Chaotix.

Sonic Crackers has Sonic and Tails joined together by a band of Rings. This would later become the idea for Knuckles' Chaotix. The game includes an interface that displays seven "Worlds", each featuring five levels of "Attractions" and one "Field" stage. Only two of these Worlds are playable, with five total Attractions and two Fields split between them.

Attractions are identical in concept to their title-sharing counterpart in Knuckles' Chaotix, being side-scrolling levels in which the player must use momentum to reach platforms. Field levels, on the other hand, feature an isometric perspective where Sonic and Tails are free from the Rings that tether them. These levels are very early in development, as there is no collision set or items to interact with.

The physics in Sonic Crackers is quite absurd, allowing the player to run on walls, ceilings, and even stop half-way up certain loops.

The Select menu of Sonic Crackers features seven Worlds, each with five Attractions and one Field level. The Attractions are labelled as "Attraction Lv. X," where 'X' is a number between one and five.[5] World two features the most complete Attractions list, showcasing the same layouts with different palettes and backgrounds. This is reminiscent of the time mechanic present in Knuckles' Chaotix, suggesting the Worlds themselves are the counterpart the Zones, rather than each Attraction serving as an independent stage. Also, on this Select screen are two "Premium" options, each holding one Attraction and one Field. The "Special" option at the end of the select menu features the Special Stage, though the game will infinitely loop upon selecting it.

The game only has two playable Worlds:

From the title screen menu of Sonic Crackers, four modes are accessible:

Pressing Start on the controller will activate the game's debug mode, allowing the player to freely move Sonic and Tails around.

Though Sonic and Tails are missing from the final version of Knuckles' Chaotix, there is evidence that suggests they were once part of the game. One of the biggest pointer would be the fact that Sonic Crackers refers to its Zones as Attractions, something that is not seen in any Sonic games other than Knuckles' Chaotix. Along with this, the background tracks in the game are early versions of "Walkin'", "Hyper-Hyper", "Evening Star", "Moonrise", and "Electoria" from Knuckles' Chaotix.

The Level Select cheat code in Knuckles' Chaotix allows the player to manually select what character's are played as. In the lineup, Mighty the Armadillo is listed in the first slot, typically where one would find Sonic in the Sonic Mega Drive games. It is already well known known that Mighty was put in Sonic's place, proven by their sprites being almost exact copies of each other. Second in the character list is a character named **********, dubbed "Wechnia" by fans. This character can be selected and played in-game, featuring a scrambled version of Knuckles' tile set overtop of Mighty's palette and behaving like Tails. 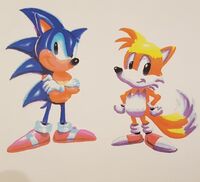