Sonic Colors (American English) (ソニックカラーズ, Sonikku Karāzu?) or Sonic Colours (British English) is a 2D platformer game released for the Nintendo DS in 2010. It is a version of Sonic Colors with a more in-depth story and a larger cast.[3]

Similar to the Wii version, Sonic the Hedgehog and Miles "Tails" Prower investigate Dr. Eggman's Incredible Interstellar Amusement Park, where Dr. Eggman admits to the public that he has turned over a new leaf and has created an amusement park to make up for his past deeds. However, the park is revealed to be a cover for Eggman, who is capturing nearby planets and kidnapping the natives: an alien race known as the Wisps. With the power of the Wisps, Sonic visits each of the planets to stop the doctor's plan.

After supposedly developing a sense of remorse for his past misdeeds, Dr. Eggman has decided to open an amusement park called "Dr. Eggman's Amazing Interstellar Amusement Park", which is located in space and made up of several planet-sized attractions, in order to make up for his transgressions. Suspicious of the doctor's intentions, Sonic and Tails investigate the amusement park before the opening day. As they comment on how pretty the place is, they see Orbot and Cubot chasing alien creatures; in the end, the robots give up, and Sonic ends up discovers his ability to harness their wonderous powers for himself. With the use of a translator built by Tails, it is revealed that the aliens are called Wisps, and one of them is named Yacker. It is also revealed that the Wisps are made of Hyper-go-on, an energy that Eggman is using to power his park.

Allying with the Wisps and using their powers, Sonic visits multiple planets, freeing the Wisps and shutting down the tractor beam generators that link them to Eggman's amusement park. Eventually, Sonic learns that Dr. Eggman is transforming the Wisps into Nega-Wisps and using them as fuel for a Mind Control Ray to conquer the universe and make the world the star attraction of his theme park. Sonic also meets many of his old friends at the park.

After freeing all planets, Sonic, Tails and the Wisps are ready to celebrate. However, Eggman, having gathered enough negative Hyper-go-ons to take over the world, tries to fire his mind control cannon, only for it to backfire due to a piece of robot scrap from one of Sonic's battles are stuck and jammed itself into the cannon. As the amusement park begins to backfire, Sonic sends Tails back down the space elevator while Sonic faces Dr. Eggman who is using the powerful Nega-Wisp Armor that harnesses the negative energy of the Wisps. With the help of every type of Wisp, Sonic defeats Eggman with the Final Color Blaster.

Depending on whether or not the player has collected all the Chaos Emeralds, they will get a different ending:

Sonic Colors is a 2.5D side-scrolling platforming video game, which plays similar to past Sonic games such as Sonic Rush. The only playable character here is Sonic the Hedgehog. Similar to past Sonic games, the goal here is to pass a series of Acts in less than ten minutes. During regular Acts, both of the Nintendo DS' screens are used to display the area, with Sonic moving between them when he reaches certain heights or depths (with some exceptions though).

While the player is able to run and jump, they can also make use of the returning Tension Gauge, where they can perform a Boost to gain extra speed. However, in this game, the player needs to collect White Wisps to fill the gauge.

A notable feature in Sonic Colors is the addition of the Color Powers; when the player touches a Wisp Capsule, the Wisps inside will go into Sonic’s body and give him a different ability. The Color Power differs from each Wisp.

Similar to the Wii version, Sonic Colors is divided into seven Areas, all of which can be selected on the World Map. Each Area is divided into two Acts each, with a Boss Act and three extra missions, with the exception of Terminal Velocity, which has only one Act. The Areas are:

Unlike the Wii version, Sonic Colors features seven Special Stages in which by completing each, a Chaos Emerald will be received. It is entirely similar to the Special Stages that were used in Sonic Rush, except instead of collecting Rings, Sonic will have to collect Spheres. The player needs to collect the spheres that are the same colors as the top screen displays. The rainbow spheres can be collected at any time and count as two spheres. If they have a number on them, they will count as the number they have. There are also checkered ones, and if the player has collected all of them, a ten sphere bonus will be received. Also, there is a special checkered sphere before the end of each round (there are three rounds, each one requiring a different sphere color), and if the player touches it, many required colorful spheres will roll from one side to the other. But the player has to be careful as touching any balls that are not in the right color of the top screens will shove them out of the course, disabling their collection.

Quick Select is an additional mode where the player has quick access to the Acts they have already cleared. To access to its menu, the player must press

while at the World Map. At the Quick Select menu, the player can press

left/right to select the Area and

up/down to select the Acts and Missions, which also show the player's statistics. To go back to the World Map, the player can press

Gallery is an extra mode in Sonic Colors where the player can watch many extras they have collected throughout the game- To access to it, the player must press

whilst at the World Map. It features the following options:

In Versus mode, the player competes against an AI or another player to see who can beat the Acts faster. The first player that makes to the goal will be the winner. It features the following options:

When the player has selected their opponent, both will select an Act to play. If the choices do not match between both, the game will randomly choose one to play in.

In gameplay, the player will appear on the top screen, while their opponent can be seen at the bottom one. The first player to finish three laps will be the winner. However, if both opponents finish at the same time or the time runs out before either of them get to the goal, it will considered a draw.

Both players have unlimited lives. However, if they die, they will restart at the latest Checkpoint they touched.

After the match, the player will have the following options:

In Time Attack, the player needs to beat an Act as fast as possible. It features the following modes:

Options is the settings mode of Sonic Colors. It features the following options:

Like the Wii version, Sonic Colors for the Nintendo DS was praised by both critics and fans alike, with Metacritic giving it a critic rating of 79 out of 100,[4] and GameRankings giving it a rating of of 77.07%.

IGN gave both the Nintendo DS and Wii versions versions a score of 8.5 and an Editor's Choice Award, calling them "the best Sonic game in 18 years" and praising their gameplay, level design and vivid graphics, while criticizing some difficulty spikes later in the game.[8] Nintendo Power gave Sonic Colours a rating of 85%, criticizing its short length.[9] Official Nintendo Magazine gave the game 85%.[10] 1UP gave the game a B+ rank, calling it "the best 3D Sonic in ages."[5] WiiMagazin, a German gaming magazine, gave the game a 92% rating while praising the game by saying that "there is a God, and he's a Sonic-fan".[11] GameTrailers gave the game a rating of 7.9, preferring it over the Wii version.[7] Game Informer gave the DS version a score of 8.5, saying that "Dimps continues its run of entertaining titles with Sonic Colors."[6] 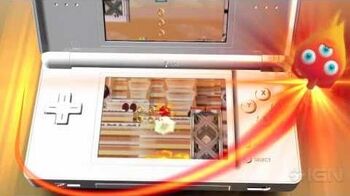