View source
watch 02:56
Raise a Floppa - The Loop
Do you like this video?
Play Sound
Main page GalleryTranscript

The English YouTube thumbnail for "Sonic Colors: Rise of the Wisps - Part 2".

Temperatures rise as Sonic and Metal Sonic clash. Sprinkle in some Wisps to the mix and you have a real feast for the eyes. It's a race against the clock, can Sonic and Jade team up to save the Wisps?[1]

On Sweet Mountain, Orbot and Cubot are setting up a Prison Capsule with Wisps inside it under Metal Sonic's watchful eye to supply energy to Dr. Eggman's facilities. As Orbot is about to hand the datadrive containing the Prison Capsules' locations on Sweet Mountain over to Metal Sonic however, Sonic swoops in and takes the datadrive from Orbot's hand. Sonic subsequently throws the datadrive into the air where it is caught by Tails. Sonic and Metal Sonic immediately begin their confrontation, during which Sonic is quick to make a quip directed at his robotic duplicate. Meanwhile, Tails informs Sonic that the Wisps are already being drained of their energy, and if they do not stop the process soon, it may be too late for them. Sonic, accepting this, throws Metal Sonic into the Prison Capsule with White Wisps inside it behind him, destroying it and setting the Wisps fee. Sonic then runs off to rescue the other Wisps, sarcastically calling out to Eggman's robots that he is not sticking around to catch up since he does not like any of them. As Orbot comforts Cubot, who got emotionally hurt by Sonic's words, Metal Sonic charges up and starts chasing after Sonic.

As Sonic runs across Sweet Mountain, Tails flies behind Sonic while informing him of the closest Prison Capsule's location. Upon spotting the Prison Capsule, Sonic quickly smashes it and frees the Wisps, including the vigilante Cyan Wisp, who caresses him in gratitude for freeing them. Sonic, however, tells them that their smiling faces (which he has a hard time identifying) are all the reward he needs. Meanwhile, Metal Sonic reaches Sonic and co., to which Sonic responds by quickly dodging Metal Sonic's attack and using the Cyan Wisp to make a quick escape as the Cyan Laser. Meanwhile, Orbot and Cubot, who are exhausted from "running", catch up to Metal Sonic. Orbot then explains that Wisps can share their power with someone they trust. This prompts Metal Sonic to catch a Cyan Wisp and force it to cooperate. Although he gets a Cyan Wisp, the Wisp refuses to help him. Fortunately, Orbot and Cubot remedy this by incorporating a Wisp Capsule into Metal Sonic's torso compartment that allows him to forcefully extract a Wisp's energy.

As Sonic heads towards the Prison Capsule containing the vigilante Blue Wisp to destroy it, the overcharged Metal Sonic manages to overtake Sonic and turn around to head towards him. However, the Jade Wisp accompanying Sonic's group saves Sonic by granting him the Jade Ghost, allowing Sonic to phase through Metal Sonic and charge into the Prison Capsule, destroying it from within and freeing its Wisps. Unfortunately, the heroes discover that they are too late to save some of the Wisps, including the vigilante Blue Wisp, who has been turned into a weak Purple Wisp. As the overcharged Metal Sonic heads towards Sonic, the Jade Wisp suddenly gets an idea and uses her power on Metal Sonic, causing the Wisp Capsule incorporated into his torso to fall out of him and causing the energy he had stolen from the Wisps to be returned to them, including the vigilante Blue Wisp, who is returned to normal. Refusing to let Metal Sonic get defeated, Orbot and Cubot try to support their "big bro" with a transformation that turns out to only be them clinging to Metal Sonic's arms, making them a burden for Metal Sonic. While Sonic is not amused by this display, he nonetheless uses the power of the vigilante Wisps to ram Metal Sonic with various Color Powers until he, Orbot and Cubot are taken out by the Blue Cube. While Sonic is ready to celebrate, Tails is worried about the thousands of remaining Wisps that are trapped around Sweet Mountain and fears that they will not be able to save them all by themselves. Sonic, however, consoles his friend by pointing out that they are not alone: as it turns out, the Wisps they have freed are already helping them out by freeing their siblings all over the planet.

With the Wisps hard at work, Sonic encourages Tails by saying that when a problem seems to big to solve by oneself, they should do what they can and ask for assistance from friends. The hedgehog high fives the Jade Wisp and adds that they should get back to their job: ruining Eggman's life. As Sonic, Tails and Yacker then run away, Tails notes to Sonic that ruining Eggman's life is more of a hobby than a job, to which Sonic agrees, as a job cannot be so much fun for him. As they take off, the Rebel Wisps carry Metal Sonic, Orbot, and Cubot away in a Wisp Capsule. The Jade Wisp follows but not before smiling at the sight of her new friends racing off. 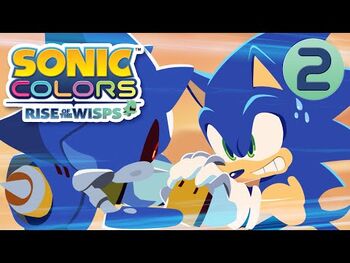 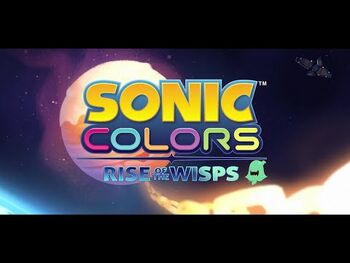