Sonic Boom Monopoly is a Sonic Boom themed version of the famous board game, Monopoly. It was released by USAOPOLY, Inc. in 2015.

Sonic Boom Monopoly was first announced in Toy World Magazine on June 1, 2015.[1] It was later released on November 30 the same year at the price of £29.99 in the United Kingdom.[2]

The Super Tax and Income Tax squares have the same function but are presented as "Bot Attack" (depicting Scrapheap Bot) and "Dr. Eggman" respectively. The four corner squares (Go, Jail, Free Parking and Go To Jail) are unchanged.

The player tokens are modelled after Sonic's shoe, Tails' wrench, Amy's Hammer, Knuckles' fist, Sticks' Boomerang and Eggman's mustache. The currency is given no value, with each different denomination's note featuring a different character from the Sonic Boom franchise:

The house tokens are yellow and the hotel tokens are blue, their colors being the only difference from those in the original Monopoly. The Chance cards are labelled "Let's Do This!" and feature Team Sonic, while the Community Chest cards are labelled "Village Chest" with a picture of Hedgehog Village from the Sonic Boom television series. All the actions, rewards and deductions awarded by the cards correspond to those from the original game, but are presented as more Sonic Boom television series-related events.

The properties are all locations or elements from the Sonic Boom television series: 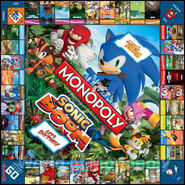 The Sonic Boom Monopoly game board.
Add a photo to this gallery

Retrieved from "https://sonic.fandom.com/wiki/Sonic_Boom_Monopoly?oldid=2184481"
Community content is available under CC-BY-SA unless otherwise noted.