For other uses of "Sonic Boom", see Sonic Boom (disambiguation).

Sonic Boom is a toyline based on the television series Sonic Boom. The toyline, produced by Tomy, started in late 2014.

Prototype models of action figures and plush toys were confirmed and on display at the New York Toy Fair in February 2014.[1] A Sonic figure with the Ancient's crystal was a GameStop exclusive in the United States, and an EB Games exclusive in Canada, as a pre-order bonus with both the Wii U and the 3DS games. 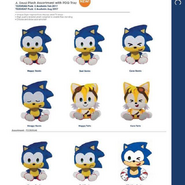 Sonic Boom emoji plushies of Sonic and Tails.
Add a photo to this gallery

Retrieved from "https://sonic.fandom.com/wiki/Sonic_Boom_(toyline)?oldid=2248481"
Community content is available under CC-BY-SA unless otherwise noted.