Sonic Boom, also known as Sonic Toon (ソニックトゥーン, Sonikku Tūn?) in Japan, is a spin-off franchise in the Sonic the Hedgehog series which consists of several video games, its connected TV series, a comic series, and a toyline. The goal of the series was to be a new comedic take on Sonic, his friends, and his foes that would appeal the Sonic brand popularity to new generations of Sonic fans across the globe.[1][2]

Like all the previous Sonic the Hedgehog media, Sonic Boom is its own timeline. However, Sonic Boom carries its own canon that is not limited to games, but rather covers all published media under its title.

On 2 October 2013, Sonic the Hedgehog, along with his friends and foes, were first announced to appear in a CG animated, action-packed comedy television series entitled Sonic Boom that was to be aired on Cartoon Network (in USA) and on Canal J and Gulli (in France) during sometime during the 2014/2015 season. Takashi Iizuka, the head of Sonic Team, is overseeing the series to ensure that it’s true to the Sonic characters and universe. The TV series would contain 52 episodes that are each 11 minutes long.[1]

On 6 February 2014, Sega announced that in addition with the TV series, Sonic Boom would also comprise of two new video games for the Wii U and Nintendo 3DS and a toyline. The games served as a prequel to the television series. The Wii U video game was developed by Big Red Button Entertainment while the Nintendo 3DS video game was developed by Sanzaru Games; Sonic Team would collaborate with the aforementioned developers to assist. The first trailers for the video games and the TV series were unveiled. The toyline was assigned to Tomy which they would showcase the characters' new looks by creating a comprehensive toy range including plush, action figures, RC, role play, vehicles and novelty.[2]

Later on 25 February, Sega confirmed the cast of the English voice actors of some of the characters that would appear the Sonic Boom video game and TV series as well as the voice director, Jack Fletcher. A behind-the-scenes trailer was also shown which included the interviews of some of the important people associated with Sonic Boom such as Stephen Frost, Evan Baily and Bob Rafei.[3]

On 29 May 2014, Sega unveiled one of the original Sonic Boom characters, Sticks the Badger.[4] Four days later, Sega revealed the names of the Sonic Boom video games: Sonic Boom: Rise of Lyric (Wii U version) and Sonic Boom: Shattered Crystal (Nintendo 3DS version) and they were both showcased at E3 (Electronic Entertainment Expo) 2014 in Los Angeles Convention Center.[5]

The cast for Sonic Boom was confirmed by Sega on 25 February 2014. Jack Fletcher works as the voice director.

A CGI-animated cartoon based on the series premiered on Saturday 8 November 2014 on Cartoon Network. First announced in Late 2013, the television series is also broadcast on Canal J and Gulli in France. There is one new episode released every Saturday, while the French version releases on Wednesdays.

Sonic Boom has been confirmed to have a toyline based on the television series. The action figures were first revealed during the New York Toy Fair in 16 February 2014. The toyline is being produced by Tomy.

Sega have revealed that they intend on licensing out Sonic Boom within the following categories:

There is a theme for the Nintendo 3DS Home Screen which is free to download.

A comic book series for the Sonic Boom franchise, based on the television series and the two video games prequels, is also announced.[8] Published by Archie Comics, the publisher of other major comics in the Sonic franchise, such as Sonic the Hedgehog and Sonic Universe, under the partnership with Sega.[9] The comic series was first hinted in the solicitation for Sonic Super Special Magazine #12, but was later officially revealed on 16 July 2014. The first issue was released on 29 October 2014 and subsequent issues are published every five weeks.

In early 2015, a series of children's books adapted from several Sonic Boom episodes were released in France by Bibliotheque Rose.[11] 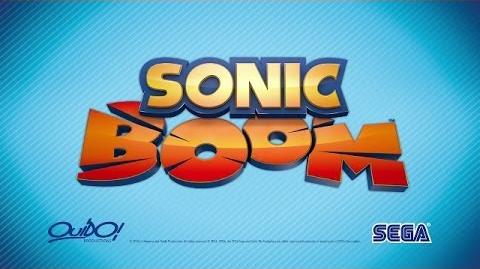 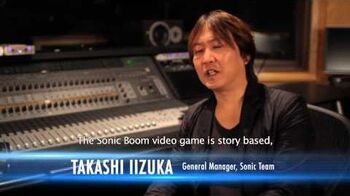