The international logo for Sonic Boom.

Sonic and crew are gonna deliver the boom!

Sonic Boom (ソニックトゥーン, Sonikku Tūn?, lit. "Sonic Toon") is an American-French CGI-animated television series developed by Sega of America in collaboration with OuiDo! Productions, loosely based on the Sonic the Hedgehog video game franchise created by Sega. Sonic Boom is the fifth animated television series based on the Sonic franchise, the second developed by Sega following Sonic X. Also, it is the second series co-produced in France, following Sonic Underground, and the first ever television series in the franchise to be produced in computer-generated animation and in high definition.

The series premiered on 8 November 2014 in the United States on Cartoon Network[19][20] and released on 19 November in France on Canal J. The show launched in Spring 2015 on the French children's network Gulli, and was followed by an international launch later in 2015 and 2016.[21][22][23] The series is a part of the Sonic Boom spin-off franchise, which consists also of five video games, a comic book series and a toyline.

The series was aimed at children, teenagers, and adults, and centers around Sonic and his friends Tails, Amy, Knuckles, and Sticks, and their never-ending search for adventure and their battles with their arch nemesis Doctor Eggman. Other characters, both new and old, also join the ensemble.[22]

The series was announced to be available for streaming off Hulu by the end of May 2016[24] and has been since 18 May. Due to Hulu being a US exclusive service and Sonic Boom being currently exclusive to Hulu, the series has been made available for streaming outside of the US on Netflix as of 23 December 2016. On 19 November 2017, the second season of the show was added to Hulu. The first season of the series became available to buy from digital storefronts on 6 November 2018.[25] On 16 March 2019, it was announced that the second season was made available for digital purchase.

The series ended after two seasons with 52 episodes each, as the show's producer Bill Freiberger confirmed that there were no plans to continue the series.[26]

The Sonic Boom animated series was designed as a spin-off from the main Sonic continuity so the staff could take the characters and their world in directions the main series could not.[27] It was first announced in October 2013, revealing a teaser image featuring the show's four main protagonists, Sonic, Tails, Amy, and Knuckles, in silhouette form.[22] The series, which originally consisted of 52 episodes with eleven minutes of running time each, is co-produced by Sega of America and OuiDo! Productions and was developed by Evan Baily, Donna Friedman Mier, and Sandrine Nguyen, with Baily and Bill Freiberger as showrunners, under the supervision of Sonic Team head, Takashi Iizuka, to ensure that it was true to the Sonic characters and universe.[22] Mike Banker also assisted with writing the television series.[28][29] On 6 February 2014, Sega revealed the first trailer for the series,[30] showcasing the new designs for the characters.[31][32]

Many of the current voice actors for the Sonic the Hedgehog video game series returned to voice the characters of the series,[33] including Roger Craig Smith as Sonic, Travis Willingham as Knuckles, Cindy Robinson as Amy, and Mike Pollock as Dr. Eggman, while voice actress Colleen O'Shaughnessey succeeded Kate Higgins in the role of Tails.[32][34] The series also introduced a new character named Sticks the Badger, a crazy and paranoid hunter who has been living alone in the wilderness for many years before meeting Sonic and his friends,[35] who is voiced by Nika Futterman. In an interview with Polygon, Iizuka stated the series came about as a desire to appeal more to Western territories, following the 2003 Japanese anime series Sonic X, with Iizuka also stating that the franchise will run in parallel with the 'Modern' series of Sonic the Hedgehog games.[36] Baily has stated the series is a mixture of action and comedy, featuring an episodic structure.[37] On 4 October 2014, Sega announced the air date of the series in the United States to be 8 November 2014.[20]

On 19 February 2015, Cartoon Network announced in a press statement that Sonic Boom, along with ten other shows, will return for the 2015-2016 TV season.[38] This was subsequently confirmed by executive producer Bill Freiberger in a fan commentary to not be an indicator of a renewal or second season at this time.[39] However, on 10 October 2015, Lagardère Entertainment Rights announced that a second season is currently in production.[40] The final animatic of the second season was edited on 27 November 2016.[41] Like season one, season two will include 52 episodes of eleven minutes length each.[42] At Tomy’s Toy Fair in New York, the second season was given an official premiere on Cartoon Network in Fall 2016.[43]

Jordi Valbuena would return for season two as the series' storyboard artist, like in season one.[44] At Sonic Revolution 2016, Bill Freiberger announced that "if there is a season two," there would be both new and old characters (like T.W. Barker, the Stunt Bears and D.B. Platypus[45]) and other surprises from other areas of Sonic.[46] It was later confirmed that Shadow and "more characters from the Sonic game universe" would make an appearance in season two.[47]

Sega itself officially pulled back the curtain on the second season at the Sonic 25th Anniversary party in San Diego with a sneak peek of "Spacemageddonocalypse".[48] Later, the video game Sonic Boom: Fire & Ice would feature sneak peaks on concept art revealing characters, storylines and subjects to be introduced in season two. Following the premiere of "Tommy Thunder: Method Actor" on Cartoon Network, it was announced on 10 November 2016, that the remainder of season two will air on Boomerang to make the channel more desirable[47][49] On 9 February 2017, Lagardere Studios Distribution signed pre-sales to more than ninety countries around the world to air the second season of the show.[50]

On 17 December 2016, storyboard artist Clemence Liberge stated on Facebook that there will be a third season for Sonic Boom.[note 1] This has yet to be officially confirmed. A Japanese dub of the series was announced to premiere on Netflix on 1 July 2017.[51]

On 10 September 2017, Bill Freiberger announced on his Twitter account that he will no longer be involved with the series following the conclusion of season two.

Sonic Boom is set in a wide-open world on Seaside Island, where most of the characters live in and around Hedgehog Village. This vast landscape is filled with jungles, mountains, undersea civilizations, cloud cities and all kinds of other environments.[52] Residing on this island are Sonic the Hedgehog and his friends: Miles "Tails" Prower, Knuckles the Echidna, Amy Rose, and Sticks the Badger. The gang spend their days trying to ward off the evil (and often zany) plans of Dr. Eggman, who is bent on taking over the island and subsequently the world.[53] In this ensemble of a comedy that pokes fun at action-adventure storytelling,[52] Sonic faces regular battles with Eggman’s henchmen, including loyal robots Orbot and Cubot, evil interns, and giant, robotic monsters.[53]

The cast for Sonic Boom was confirmed by Sega on 25 February 2014. Jack Fletcher works as the voice director.[32] On 29 May 2014, Sega announced that Nika Futterman will play the role of Sticks, a jungle badger, who joined the franchise as a major character.[1][54] Several new characters were also created for Sonic Boom, such as Mayor Fink, Fastidious Beaver, and Perci.[55] Jack Fletcher works as the show's voice director, a role he has also held for the Sonic video game series since 2010.

Common Sense Media gave Sonic Boom 4 out of 5 stars. Internet Movie Database also known as IMDB gives this series a rating of 7.9/10 based on 4789 ratings. Critics pointed the show out for being a bit violent for children and making usage of name-calling, but praised it for its light humor and recurring themes about friendship and teamwork.[59] Sonic Boom later won the award for Best Animation at the 2017 Chico Independent Film Festival, namely under the director, Natalys Raut-Sieuzac.[60]

Sonic Boom was also selected for the annual Export Awards of 2017 in France, which rewards the best-selling French television programs worldwide.[61] On 20 June 2017, Sonic Boom was nominated for a "Teen Choice" award for animated TV shows, but lost to Family Guy.[62] On 27 August 2017, Filmchilla awarded Sonic Boom with "Best Series." 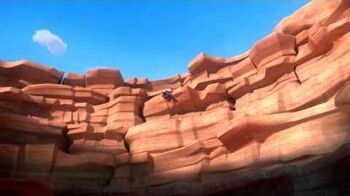 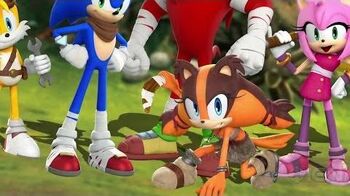 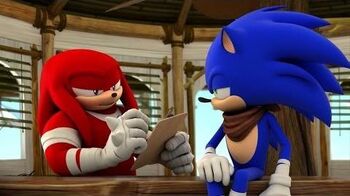 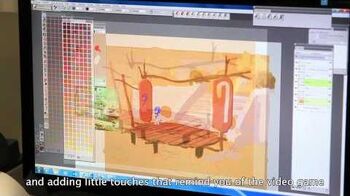 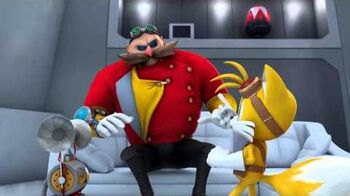 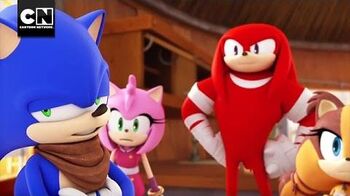 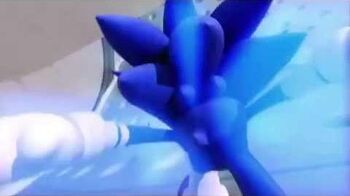 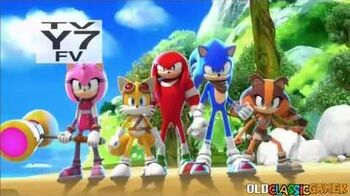 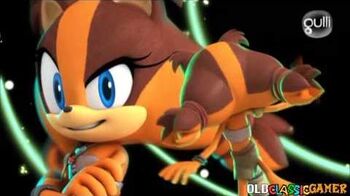