Sonic Adventure 2: Battle (ソニックアドベンチャー2 バトル, Sonikku Adobenchā Tsū Batoru?) is the enhanced port of the Dreamcast video game Sonic Adventure 2. It was released on December 2001 in Japan and 2002 elsewhere for the Nintendo GameCube, making it the first Sonic the Hedgehog game to be released for a Nintendo game console. This port includes a variety of exclusive new features and alongside several changes.

Sonic Adventure 2: Battle received generally positive reviews from critics with a score of 73/100[1] from Metacritic although it was lower than that of the original Dreamcast version. Critics praised the gameplay and graphics but criticized the camera movements and some of the characters' script. IGN motivated the "A blistering framerate, sharp and detailed textures, and even progressive scan support.", but had negative reviews on both voice acting and sound effects.[2]

Sonic Adventure 2: Battle was the #1 selling title on Nintendo GameCube in its first week of availability, having sold 2.56 million copies in total.[3][4][5] 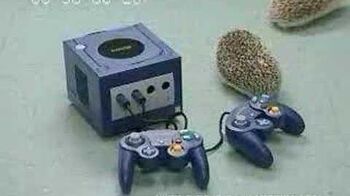