Template:Need Proof This article pertains to the beta elements from Sonic Adventure.

Sonic Adventure was originally titled Sonic RPG, to be released on the Sega Saturn. However, by the time the Dreamcast came out, the developers realized they would need a better system that could handle the creature Chaos.

Sega originally wanted the Classic forms of the characters in the game, but decided to fully use the Dreamcast's capabilities, and ultimately re-designed Sonic, Tails, Knuckles, Amy and Eggman. Models would be the same as Sonic R.

Like in previous games, Super Sonic was originally going to be playable in regular stages.

It is possible this was removed for more bug fixes, as the game was a little bit rushed at the end of development. There is an unused audio file within the game's data in which Tikal explains how to transform into Super Sonic.

In Sonic's gameplay, when he is chased by an orca, in the platforms there were no dash-pannels.

In Big's gameplay, Froggy was originally in the secret passage, and Big had to catch him there instead of near the lighthouse. This is probably the reason why this secret passage exists in the first place.

Windy Valley was a completely different stage in early development. There are a few screenshots showing Tails flying around in an unknown location and also some gameplay footage showing Sonic and the rest of the cast walking around in this unfamiliar environment. Even the final release's intro video and Amy's very first cutscene are showing pictures of this place which was later proven to be a beta version of Windy Valley. Remnants of the stage were found within the files of the Sonic Adventure Auto-demo. Attempts to launch the level within the game itself weren't successful yet because of missing files which are causing the game's crash when trying to do so. This geometry seems to be the beta version of the third section of Windy Valley which was partially used as a beta Chao Garden as well. Pre-release footage also shows that the first section had it's own beta version as well and was partially re-cycled for the final design. Amy and Big were originally playable in this stage.

Originally in the "Goin' Down" section, there weren't helicopters. The "At Dawn" section of Speed Highway was fairly different from the final release. The section was redesigned and a few parts were removed completely for yet unknown reasons.

Originally, Sonic and Tails have their classic desings from Sonic R like Sky Chase Act 1, and they were supposed to use the Tornado instead of the Tornado 2, so that means that the Tornado 2 doesn't exist in the early version of the game. The Tornado 2 originally didn't transform.

Those little purple enemies of Final Egg were originally purple and yellow.

In the Sonic Adventure Auto-demo, An unused duck enemy was found in Final Egg.

Knuckles was going to use the uppercut but then was scrapped for unknown reasons.

There was an unused mini-boss of a mechanical twin-headed dragon that was going to be a mini-boss in both acts of Sky Chase. It is invisible, but it follows the Tornado in flight without damaging it.

The loading screen was originally in the middle of the screen and had the title of the game in black and white.

The Chaos Emeralds originally had their prior games design.

Originally, each area of Station Square was going to be completely connected, some leftover of this attempt can still be found within the final release if the player meets certain conditions and activates debug mode (an untextured floorless version of the Casino Area can be accessed from Station Square's coastal area which loads itself as a part of it which suggests that at some point in development the Station Square hub area was supposed to be loaded in it's entirety).  Also, more pedestrians were going to roam around the city. It is also possible to see the Casino Area by loading the Casino Area, leaving it and glitching out of the map. 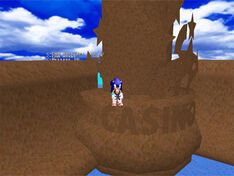 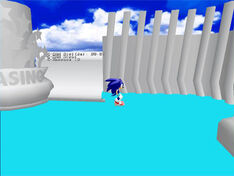 The train was possibly going to leave and arrive without the player's boarding, but this was possibly removed because the areas would overlap.

This video is about SADX Prototypes.

At http://youtu.be/52fP78Echjo?t=7m20s you can see Omochao and the beta version of the Chao lobby.