View source
watch 02:46
The Quarry - The Loop
Do you like this video?
Play Sound
Main page CreditsGlitchesGallery

Join the quest to defeat the evil Dr. Eggman!

Sonic Advance 3 (ソニックアドバンス3, Sonikku Adobansu 3?) is an action platform video game in the Sonic the Hedgehog series, developed by Dimps and published by Sega and THQ.

The game was released in June 2004 for the Game Boy Advance. It would be later re-released in Japan for the Wii U's Virtual Console on May 2016. The game uses elements from Sonic Advance and Sonic Advance 2, as well as allowing the player to choose an additional partner, who augments the player's actions.

After the Emerl incident, Dr. Eggman has used the leftover data from Emerl to create Gemerl.[2] Later, using Chaos Control, Eggman breaks the earth into seven pockets of reality with the intent of conquering each section and turning them into the Dr. Eggman Empire.[1][3] Sonic is left stranded with Tails in Route 99, and teams with him to find their friends, Knuckles, Amy and Cream; and restore the world by finding the Chaos Emeralds.[3] Whilst on their journey, Sonic and Tails find their friends, who join them. They also face off with Eggman's various machines.

Eventually, Sonic and his friends go to Altar Emerald, where they have a fight against Gemerl and Eggman in the Hyper Eggrobo. The ending of the game from there will depend on the player's progress:

Sonic Advance 3 is a 2D side-scrolling platforming video game, which plays similar to past 2D Sonic games. In it, the player takes control of Sonic, Tails, Knuckles, Cream and Amy, each with their own individual abilities.

Sonic Advance 3 contains seven Zones, each of them having separate hub worlds called "Zone Maps" that include three Acts, a boss fight and two minigames that are used to gain extra lives. Rather than segueing immediately between Acts as happens in other 2D Sonic the Hedgehog titles, Sonic Advance 3 uses a "hub" system where the characters have to explore a separate world from the Acts in order to enter each Act. Once all three Acts are found and cleared, the player can then move onto the boss. In the interconnecting hub, players can also exchange who their active pairing is by entering the giant Factory Ring near the entry point and switch between past Zones that were completed.

As with past 2D Sonic games, the main goal of Sonic Advance 3 is to beat all Acts in less than ten minutes. Rings can be found scattered throughout the game. As with past titles, Rings protect the playable character from attacks; if the player is hit while carrying at least one Ring, they will survive, although at the cost of dropping all their Rings. However, if they receive damage while not having any Rings, they will lose a life, or get a Game Over if they run out of lives. In the former, the player will respawn at the latest Checkpoint they touched, or in the start of the Act if they have not touched any Checkpoint. Extra lives can be obtained by gathering one hundred Rings or breaking 1-Up Boxes.

Unlike past games, Sonic Advance 3 requires the player to select a playable character and a partner character to assist them. Player 1 controls the leader character, while the partner is controlled by either a second player or an AI. Additionally, players can use a special ability known as Tag Action; the player can pick up the teammate by holding

, and then release it to perform various special actions.

Besides the character actions, a partner affects the leading character's moveset and passive abilities. Each team-up also has a categorization showing its strength, which is either Flight, Power, or Speed, along with a description determining their partnership:

Sonic Advance 3 was reportedly "racing off store shelves" as soon as it was released.[21] The game also received positive reviews from critics, with respective scores of 79% and 81.37% at review aggregators Metacritic and GameRankings.[10][11] It later won "Handheld Game of the Year" at the 2004 Golden Joystick Awards[22] and sold over 100,000 copies in the United Kingdom alone.[23]

Critics gave mixed opinions to the team-up dynamic. Nich Maragos from 1UP.com celebrated that Sonic Team had "finally [come] up with a way of introducing teamwork and variance between characters that doesn't overwhelm Sonic's bread-and-butter gameplay." Maragos singled this out as the main divider between Sonic Advance 3 and Sonic Heroes, a game that he found surprisingly linear in level design considering that it, unlike Sonic Advance 3, was in 3D.[12] Maragos, GameSpot's Frank Provo, IGN's Craig Harris, and Game Informer's Lisa Mason appreciated the increase in replayability Sonic's friends brought.[12][14][16][19] However, Mason, as well as reviewer Stardingo from Gamepro, thought that they played too much like Sonic and did not add much to the experience.[14][15] Darryl Vassar of GameSpy took a different point of criticism: he acknowledged the presence of genuinely different character abilities, but perceived that their only purpose was to find Chao, whom he called "pointless".[17] Maragos noted that the "mid-air trick" system from Sonic Advance 2 was optional in Advance 3, but spoke positively about its usefulness in locating "hidden areas".[12] Harris argued that such varying team abilities contributed to occasional "cheapness" in the level design, because "most of the characters have absolutely no defense when hopping off items like springboards."[19]

However, the gameplay was mostly well-received otherwise. Vassar acclaimed the level design: he both called the levels "enormous and fast" and praised the slower, smaller sections for "keeping the levels distinct and adding short interludes to the constant running and loops."[17] Harris also praised the "clever" level design.[19] However, Mason found it "simplistic",[14] while Stardingo saw "repetition" in the typical formula.[15] Maragos criticized the contrasting difficulty of the bosses and some minor control issues.[12] Vassar, however, appreciated the return from Advance 2's running-based boss battles to more traditional ones.[17] Further praise from Harris, conversely, went to the multiplayer mode and—along with Stardingo—to the presence of a hub world, which Harris and Stardingo thought gave the game structure.[15][19]

The game's aesthetics were also well received. Provo stated that "in terms of graphics and sound, Sonic Advance 3 is on par with the best that companies like Nintendo and Konami have had to offer this year". He specifically complimented the character animations, simulations of underwater waves, and in-depth background effects.[16] Vassar praised Sonic Advance 3 for continuing Advance 1 and 2's emulation of the "colorful, angular, and stylized look" of the original Sonic the Hedgehog for the Sega Genesis, as well as its "twangy, upbeat tunes".[17] Stardingo thought similarly overall but criticized the "garish" themes of the level Toy Kingdom.[15] 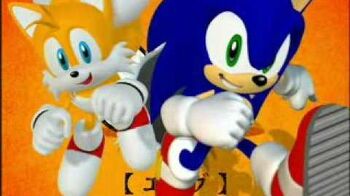 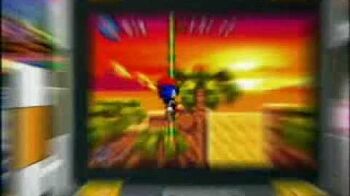