The show opens with a CGI intro with Sonic, riding a motorbike who then jumps onto a helicopter with the Sega logo. The logo is then shot down by a fighter jet and explodes, as Sonic then jumps out of a TV as the episodes title card appears.

The show features a cartoon Sonic that occasionally appears in the right hand corner of the screen talking in a high pitch voice to the contestants of the show.

The prizes given out to contestants include a Sonic the Hedgehog 2 themed watch and a Sega Mega Drive 2. 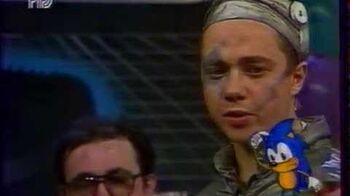 Sonic the Hedgehog in other media
Retrieved from "https://sonic.fandom.com/wiki/Sonic_-_Super_Hedgehog?oldid=2352918"
Community content is available under CC-BY-SA unless otherwise noted.