Sonic & Knuckles Collection (ソニック＆ナックルズコレクション[3], Sonikku to Nakkuruzu Korekushon?) is a video game compilation of four (five in North America and Europe) Sonic the Hedgehog titles. It was developed by Sonic Team and released for Windows-based PCs by Sega in 1997. It was later re-released by different distributors in multiple regions.

The games included in the compilation are as follows:

The background music of the games in Sonic & Knuckles Collection is emulated in MIDI format. Additionally, the windows version has an option in the set-up menu for FM synthesis instead of general midi. However, some of the soundtracks were replaced with music taken from an early prototype of the game. These include Carnival Night Zone, IceCap Zone, Launch Base Zone, Sonic the Hedgehog 3's credits theme, Knuckles' theme in Sonic the Hedgehog 3, the sub-boss music from Sonic the Hedgehog 3, and the Competition main menu. One possible explanation for this is that the final pieces of music from the Mega Drive version used sound effects not contained within the general MIDI standard, and many sound cards at the time of release did not have the capability to play additional samples along with the MIDI. Another explanation for the replacement is that the songs were replaced due to legal reasons, because connections could be made between similar songs by Michael Jackson.[6] Musical differences aside, the game plays virtually identically to its original incarnations.

A notable difference in the compilation is that the Level Select cheat code only works for Sonic the Hedgehog 3 in Angel Island Zone. It also does not enable Debug Mode like in the original, although it is still capable of enabling playable characters to be playable in Zones that they cannot access without Level Select, such as Tails in The Doomsday Zone and Knuckles in Sky Sanctuary Zone Act 1. Also, when using the Level Select code in Sonic the Hedgehog 3, following by selecting the first Special Stage option, the player is allowed to play as Knuckles in the Zones for Sonic the Hedgehog 3, unlike in the original where following this procedure would access Blue Sphere, although these Zones are incomplete can cannot always be beaten. Also, the Sound Test is featured in the options toolbar instead of in the actual games; this is due to a glitch that would occur where the game would reset if the player tried to listen to a song.

Sonic & Knuckles Collection is virtually impossible to play in windowed mode on any system with a CPU faster than 350Mhz as the game does not have proper speed-limiting routines in this mode.[7] However, the timings used by the game are based on the monitor's refresh rate. Switching the game to Fullscreen mode lets the game play properly, no matter what the system's speed is. In windowed mode, the game can be played at the correct speed whenever the screen refresh rate is at 60 Hz. Sega has also provided a patch to fix this problem without reducing the refresh rate.[8] 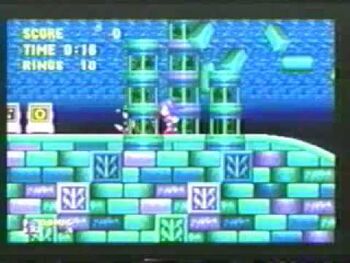