Sonic News Network
Register
Don't have an account?
Sign In
Advertisement
in: Sonic Advance, Alternate versions and ports, Other platform games,
and 2 more

SonicN is a port of Sonic Advance for the Nokia N-Gage handheld gaming mobile device. The port was released in October 2003 in the United States, Europe and Australia as one of the handheld's launch titles.

SonicN is nearly identical to Sonic Advance in terms of core gameplay. Several features however, are removed from the port or adjusted to it due the technical limitations of the Nokia N-Gage.

IGN gave the game a score a 6.0 out of 10, criticizing the game for ignoring the N-Gage's connectivity capabilities and being an inferior port in comparison to the Game Boy Advance version.[2] GameSpot stated the port has responsive controls but criticized it for having a poor frame rate, menial sound quality, and irritating display modes.[3] 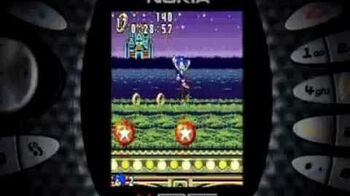