The title screen for Sonic's Napoleon.

Sonic's Napoleon (ソニックのナポレオン), also known as Sonic no Napoleon, is a mobile phone game released as part of the Sonic Cafe service offered by Sega.

In this game, the player is Sonic and plays the Napolean card game against Tails, Knuckles, Amy Rose and Robotnik. The goal of the game is to gain the most points over five rounds of play. At the start of each round, a "Napoleon" is declared by whose hand of cards has the most points in that round, and the other players are then all playing against that one player. As such, alliances can be forged and broken amongst the non-Napoleon players (known as the "Coalition forces") to help limit the Napoleon's points. The player with the most points at the end of the five rounds wins. High scores can be uploaded to a league table. 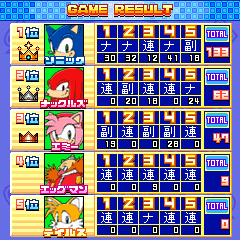 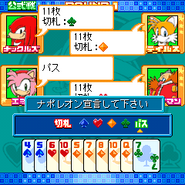