Sonic has been imprisoned in Prison Island. Howard Watcher announces as he can't escape, the hedgehog decides to kick back and relax in his cell. Meanwhile Eggman flies by the island and emits a supersonic wave, disrupting the communications around the island as the guards watching the prison screens receive static and attempt to sound the alarm but it is disabled. Eggman requires the Chaos Emeralds located on the island along with Shadow and Rouge despite of Decoe and Bocoe's pleas not to trust Rouge but the doctor cuts them off. Eggman plans to distract the military forces focusing on him while clearing a path for Shadow and Rouge for their tasks while infiltrating the island: setting a bomb to detonate the entire facility and collecting the Chaos Emeralds respectively. Sure enough, Eggman begins to fulfill his part of the task by distracting the base's defenses. As Shadow and Rouge head towards the entrance and destroy it, Tails and Amy arrive at the spot with the X Tornado in an attempt to rescue Sonic. Amy sees Shadow and mistakes him for Sonic and hugs him from his back. As Shadow shows no kind of reaction towards her, Amy realizes that Shadow is not Sonic and demands to know about the black hedgehog until Eggman cuts in, repelling the heroes while Rouge and Shadow head inside. Tails proceeds to fight Eggman in the skies while Amy goes to find Sonic while she notes the hedgehog's similarity to Sonic in appearance. At the same time Chris and Mr. Tanaka arrive on Prison Island with a paddle boat, also attempting to save Sonic and prove his innocence.

Amy finds Sonic in an underwater isolation cell. Amy wonders all the writing in the cell and asks Sonic if he wrote it, but he says they were already there. Amy also mentions that Shadow is also on the island. This gets Sonic's attention and Sonic then breaks from the cell and asks Amy to help him escape. Meanwhile Tails engages Eggman before the latter leaves to continue with his plan. Shadow prepares the bomb and Eggman orders him to set the timer into fifteen minutes. But Rouge then says that she can be out within five minutes, so Eggman tells Shadow to set the timer for ten minutes. However, when Rouge found the last Emerald, she got locked inside the vault with no way out. Shadow forgets about Rouge and runs off to find Eggman and escape. But then Sonic shows up and confronts Shadow, then the two hedgehogs battle. Unfortunately their fight is interrupted twice, first by Rouge and then Eggman telling Shadow that he's not waiting for him or Rouge any longer and has to escape or be blown to bits.

Sonic takes off to warn everyone to escape from Prison Island to mention the fact that Sonic, Amy, Tails, Chris and Mr. Tanaka were unaware that there was a ticking time bomb on the island. Later, Chris finds Shadow and also mistakes him for Sonic, but realizes that it is not him then figures that with Shadow he can prove that Sonic is innocent. Rouge contacts Shadow for help and although he was reluctant at first, he decides to help her. He uses Chaos Control to teleport himself and Chris to the vault where Rouge is, knocking Chris to the ground. Rouge doesn't want Chris to be left behind and although Shadow is reluctant to keep Chris alive, he suddenly receives flashbacks of Maria and finally uses Chaos Control to teleport Rouge, Chris and himself right at the last second. The bomb finally detonates, creating a huge explosion in the island and Mr. Tanaka believes that Chris died in the explosion, causing him a great grief. 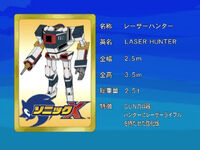 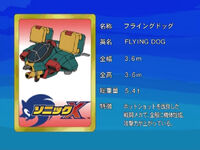 Flying Dog
Add a photo to this gallery