These phantoms from the Underworld have no bodies to speak of–they're given shape by the pieces of armor they wear. When Sonic runs across one of these footsoldiers, he never knows what kind of threat he's facing, as their weapons, tactics, and roles vary.

The Soldier-One (sword) (ソルジャー・ワンズ（剣）, Sorujā wanzu (ken)?) is an enemy that appears in Sonic and the Black Knight. They are a type of the Knights of the Underworld, being the basic Soldier-One and grunt of their species. They wield swords which distinguish them from the other Soldier-One variants.

The Soldier-Ones are humanoid creatures. They are covered in full-body purple and gray armor resembling that used by medieval knights which has orange-yellow medieval markings around the torso and the shoulder blades. Behind their helmet, they have a single eye. The inside of their armor however, is completely empty.[1]

The Soldier-Ones are the most common enemy in Sonic and the Black Knight, appearing in every area excluding Dark Hollow. They are first encountered in Misty Lake during the battle with King Arthur.

Easy to dodge and defeat, the player can destroy a Soldier-One with just one sword slash. However, in some cases, they are equipped with shields which can protect them from upcoming frontal attacks, though these shields will eventually break down when hit with enough attacks (the shields of wood are the weakest while those of metal are the strongest).

The Soldier-Ones are able to teleport to different locations by emerging from black voids. They also have impressive jumping abilities, allowing them to jump several meters into the air.

According to Caliburn, the Soldier-Ones are full-fledged knights, suggesting they possess a high level of fighting skills. They have each a respectable level of skills in swordsmanship and shieldsmanship, being able to use both swords and shields offensively with proficiency in combat. 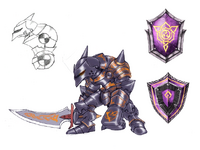