The Soldier-One is an enemy that appears in Sonic and the Black Knight. They are a type of the Knights of the Underworld and a variant of the Soldier-One.[1] They wield crossbows which distinguishes them from the other Soldier-One variants.

The Soldier-Ones are humanoid creatures of the underworld. They are each clothed in gray full-body armor resembling those worn by medieval knights which has purple medieval markings on the arms, torso and helmet. Their helmet in particular resembles a hood with a mask covering most of the face. Behind the helmet, they have a single eye.

The Soldier-Ones are one of the more common enemies in Sonic and the Black Knight, though they do not come in as many numbers as the sword-wielding Soldier-Ones. They are first encountered in Crystal Cave and can be encountered in many other areas afterwards.

The Soldier-Ones primarily attack by shooting a rain of arrows for a couple of seconds which can blocked with Guard. When these arrows hit the ground, they will be embedded in it for a couple of seconds before disappearing. Touching the grounded arrows before they disappear will cause damage to the player. When not using their arrows, the Soldier-Ones charge into the player with their shoulder (their shields when they have them) which will knock the player backwards, but not damaging them.

The Soldier-One can easily be defeated by the player with a single sword slash, like most other Knights of the Underworld. In some cases though, they are equipped with shields which can protect them from upcoming frontal attacks, though these shields will eventually break down when hit with enough attacks (the shields of wood are the weakest while those of metal are the strongest).

The Soldier-Ones are said to be crafty opponents.[1]

The Soldier-Ones are able to teleport to different locations by emerging from black voids. As their specialty, they have the ability to generate yellow self-sustaining energy arrows which they can use as projectiles.

The Soldier-Ones are excellent archers as they can use bows with both efficiency, accuracy and fire multiple successful arrows in succession. They also possess some skills in shieldmanship, being able to use shields for both offense and defense in battle. 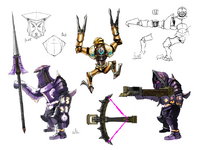 The Soldier-Ones arrows being embedded in the ground.