For the project, see Solaris Project.

That body of light is the sign of a super-dimensional life-form. Standard attacks won't work on him. He eats dimensions for lunch!

Solaris (ソラリス, Sorarisu?) is the main antagonist of Sonic the Hedgehog (2006). He is the sun god of Soleanna, as well as a super-dimensional lifeform and a god of time, who is worshiped by the people of Soleanna. Originally a living flame, Solaris was split into two halves during the Solaris Project: Mephiles the Dark (his conscious mind) and Iblis (his raw power). Both of Solaris' halves were subsequently sealed away.

Ten years later, Mephiles and Iblis were freed and rejoined, recreating Solaris who sought to destroy time itself, but was defeated by Super Sonic, Super Shadow and Super Silver. Solaris was subsequently erased from existence, ensuring his wrath would never be unleashed on the world.

Prior to the Solaris Project, Solaris was nothing more than a white flame. After his rebirth, Solaris took on a more creature-like form made of light with a red orb holding his consciousness in the center. His base form has no head, with a piece above his core resembling an upper torso with a curve behind the "neck", and a lower body that resembles a stalactite. He also has two palm-less arms not connected to his body at his shoulders, each with three fingers.

In his first form, Solaris wears three cyan shells of light, two of which covered each of his forearms. The third covered his chest are and core, and has a figure on top that resembles an eagle head with glowing yellow eyes and antlers. Additionally, he has a ring with six triangular pieces floating at the edges, resembling a sun on his back. In his second form, Solaris loses his light shells, and the ring on his back is replaced with a plate that has a pair of wings "attached" to it, each made of five segments.

Solaris initially existed as an apparently sentient flame which had been entrusted to the royal family ruling over Soleanna and was worshiped by the citizens of Soleanna. Legends foretold, however, that Solaris' wrath, the Flames of Disaster, were destined to one day awaken.[2]

During the reign of the Duke of Soleanna, when Solaris' flame had grown large enough, the duke initiated the Solaris Project in hopes of harnessing Solaris' power so that humanity could change history to correct past mistakes (and allow himself and his daughter, Elise, to see his deceased wife again). During the duke and the researchers' experiments on the deity however, Solaris became unstable and split into two forms in a massive explosion: Iblis, the raw power, and Mephiles, the cunning mind. Mephiles was sealed inside an artifact known as the Scepter of Darkness by the time-traveling Shadow the Hedgehog, while the Duke sealed Iblis inside of Elise's soul. Before dying from the wounds caused by the accident, he told his daughter to never cry, as doing so would destroy the seal holding Iblis within her.

In Sonic the Hedgehog (2006), Mephiles was freed and began plotting to reunite with Iblis. By making Elise cry after killing Sonic the Hedgehog, Mephiles released Iblis and the two entities rejoined to create Solaris again. Solaris immediately plunged the world into darkness and prepared to devour time itself by consuming all existing timelines. Before he could achieve this, however, he was defeated by a combined assault from Super Shadow, Super Silver, and a resurrected Super Sonic. The three heroes managed to defeat Solaris by destroying his consciousness. Solaris' defeat reverted him back to his original form and spirited Elise and Sonic back to the time before the fateful experiment. After some contemplation, Elise chose to blow out the flame that would become Solaris - thus changing history by erasing his corporeal form from existence.

In Sonic Runners, Solaris is mentioned on Mephiles the Dark's character profile.

As a singular being, Solaris' personality was never fully explored. He can be seen as an archetypal being considering how the citizens of Soleanna worshiped it. As stated by Dr. Eggman though, Solaris could be gluttonous and amoral as it would freely consume different timelines until there was nothing left.

As a tiny flame, Solaris was completely subtle. However, during the Solaris Project, the deity revealed himself to be quite wrathful, refusing to cooperate with the Duke of Soleanna and caused an explosion that took the lives of everyone involved.

Solaris is arguably the most powerful being in the entire Sonic the Hedgehog series; Dr. Eggman theorized that without targeting Solaris' weakness, the deity was impossible to stop. Along with possessing several godlike traits, it took the combined might of three Super States to defeat him, and even then, they could not actually destroy him. As another testament to his power, Solaris is one of the few beings that can bypass the invulnerability of a Super State through sheer force.

Much like his two halves, Iblis and Mephiles, Solaris is immortal and virtually indestructible. His body is unaffected by standard attacks,[3] and it takes no less than super-charged chaos powers from Super State users just to inflict harm on him. Even then, he was able to easily revitalize himself after taking extensive injuries from Super Sonic, Super Shadow, and Super Silver. He is also able to project energy as massive lasers and purple orbs, which are powerful enough to bypass the invulnerability of a Super State. In his second form, Solaris also demonstrated the ability to generate an impenetrable force-field. However, this field works both ways, so Solaris has to lower it when attacking. Additionally, he could create energy projectiles that tracked down his opponents (similar to Mephiles).

Solaris is capable of at least limited shapeshifting, allowing him to assume new and stronger physical forms, as seen when he changed the sun-like appendage on his back into wings and expanded upon his limit for firing energy beams and his attack velocity. According to Princess Elise and Eggman, Solaris also possesses pyrokinetic abilities, which is further enforced by his relationship to Iblis, a being of fire, and how he can create Iblis's Minions.

Being a god of time, Solaris can freely manipulate and change the fabric of time itself; according to Dr. Eggman, Solaris is capable of devouring time and space on an incomprehensible scale, encompassing consuming entire dimensions and all existing timelines, and causing world-wide instabilities that create distorted time-space rifts filled with the remains of the planet. As a transcendent life form, Solaris possesses a unique state of existence that lets him exist in the past, present and future simultaneously, making him omnipresent throughout time and virtually impossible to defeat unless he is attacked simultaneously in all eras.[4][5][6] He can also create time-space rifts which can either suck objects into oblivion or hurl meteors of condensed matter from other places at enemies which can injure even a Super State user.

Solaris' only vulnerable point is the red core in the center of his body that holds his consciousness. By destroying it, Solaris' body would be left unusable, albeit intact.

End of the World

The final boss of the game has two phases. In first form it can throw meteors with its telekinesis and fires a chest laser while having heavy protection. The second and last form of Solaris features more meteors and lasers at the fight.

Solaris is the last boss of the Last Episode of Sonic the Hedgehog (2006), and the overall final boss of the game. He is engaged directly after completing End of the World, and is fought with Super Sonic, Super Shadow and Super Silver.

When fighting Solaris, the player takes control of Super Sonic, Super Shadow and Super Silver. Like most Super States, Rings are required to maintain them during the boss battle. If the player runs low on rings, they can switch characters to collect more. The boss has two phases. Getting hit by an attack from Solaris will cost the player ten Rings.

As soon as the player can attack Solaris again, they should switch to Super Shadow and start charging up his Action Gauge. When it is full, launch a full salvo of Spear of Light and then Turbo Boost to either side of Solaris to avoid immediate retaliation. Super Shadow is the best hero to use in this final attack, so the player must take extra care to always switch characters before his Ring count dips below ten. Solaris increases the frequency of meteors thrown through the void, so Super Silver is a pivotal hero to use in this second attack on Solaris. The player should use his Shield of Light to capture the meteors and return fire. The player must always watch Solaris' wings, as when they begin growing especially bright, the player must be ready to Turbo Dash to either side to avoid an incoming Beam Attack. When the player must let Super Shadow and Super Silver build up their depleted Rings, they can use Super Sonic's Arrow of Light when Solaris leaves his core completely exposed. When Super Sonic does not have a full Action Gauge, the player should use Turbo Boost to zip around Solaris and avoid incoming attacks. When Solaris' health bar is almost empty, the player should use whatever attacks they have available. In desperation, Solaris will unleash a violent torrent of meteors and energy beams. The player should keep switching between Super Shadow and Super Silver so they can attack from a safe distance, preferably using Super Shadow as he can attack while moving. The player should avoid hovering in one place, as the instant Solaris draws a bead on them, he will release a flurry of attacks. 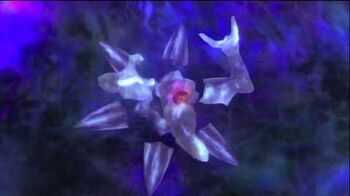 In the Sonic the Hedgehog comic series and its spin-offs published by Archie Comics, Solaris is present in comics' universe, but never made an appearance. Much like in the game, Solaris was originally a flame which was split into Mephiles and Iblis during experiments conducted by the Duke of Soleanna and his researchers. Solaris was eventually restored due to the actions of Mephiles and prepared to destroy time, but was stopped, and eventually erased from existence by Sonic the Hedgehog and Princess Elise.