A jungle course covered with frozen plants and snow.

The once-green park now sleeps beneath an ice-encrusted bobsled track!

Snowy Kingdom is the third course of the Babylon Story in Sonic Riders: Zero Gravity. The course is set inside a vast forest in Monopole, but the temperature has been lowered to create a snowy area.

During the story, the goal is for Wave to finish the three laps of the course within the time limit to stay ahead of Team Heroes to gather more information about the Arks of the Cosmos. 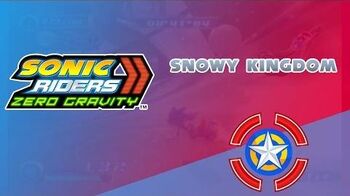