Snowy is a badnik that appears in Sonic the Hedgehog 4: Episode II. It is a polar bear badnik, it appears in the level White Park and is capable of taking three hits instead of one hit unlike regular badniks, unless hit with a Rolling Combo.

A newly developed Polar Bear type robot for cold regions. It's specialty is unleashing powerful attacks with its super heavy body. Its body is also tough, and this makes it a formidable enemy that will not be taken down with just a few attacks. 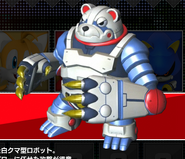 Retrieved from "https://sonic.fandom.com/wiki/Snowy?oldid=721354"
Community content is available under CC-BY-SA unless otherwise noted.