Snowy is a Badnik with a large body, strong hands, and heavy feet. When it sees the player, it approaches with hands upright toward the direction of the player, attempting to hurt him/her by slamming his large hands together.

Snowy is more durable than other badniks, shown by its ability to withstand three hits instead of one. Using a Rolling Combo or Super Sonic lowers its defense to two hits. Despite its size and increased endurance, Snowy still rewards the player with a standard 100 points. 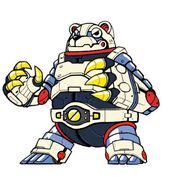