For other uses, see Snowy (disambiguation).

A Snowy, from Sonic the Hedgehog 4: Episode II.

The Snowy[1] (ベアラ[2], Beara?, lit. "Bearer") is an enemy that appears in the Sonic the Hedgehog series. It is a mass-produced, polar bear-based Badnik model created by Dr. Eggman for cold regions.

The Snowies are based on polar bears. Unlike regular polar bears, however, they walk on two legs. They boast a bulky body with no neck between their heads and torsos, and possess menacing black eyes. Their torsos are dark blue with white chest armor and white belt-like plating around their waists. They also have light blue upper arms and massive white forearms with red joints at their elbow joints and large four-fingered paws with yellow claws. They also have stubby and heavy light blue legs with white armor plating around their ankles and red rims between their legs and pelvis. Lastly, they have oversized jaws, black noses, a blue patch across their faces, and round ears with red inner ears on their heads.

In Sonic the Hedgehog 4: Episode II, the Snowies appear as enemies. They are only encountered in White Park Zone.

In gameplay, when the Snowies see the playable character, they will approach them with hands upright toward the direction of the playable character, attempting to hurt them by slamming their large hands together. Also, unlike most other Badniks in the game, it takes three hits instead of one to destroy them. Noticeably, after taking two hits, a Snowy will begin to emit smoke and create sparks. Using the Rolling Combo or Super Sonic on it lowers its defense to two hits. Despite its size and increased endurance however, Snowies still rewards the player with a standard 100 points when destroyed. Also, upon their destruction, they release an Animal.

The Snowies are slow, but possess great power in the form of super strength great enough to move around their heavy bodies. They also possess tough bodies for a Badnik, which make them formidable enemies.

In the Sonic the Hedgehog comic series and its spin-offs published by IDW Publishing, the Snowy first appeared in Sonic the Hedgehog #14 as a part of the Badnik group clearing out an Eggman base. Their past is virtually identical to their game counterparts', up until after the events of Sonic Forces. 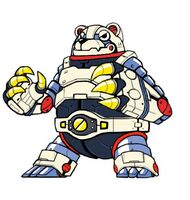