Smiley is a character that appears in the Adventures of Sonic the Hedgehog television series. He is a card shark who likes to gamble for high stakes with Mobian inhabitants.

Under Dr. Robotnik's orders, Smiley got several Mobians to play for free labor and won against over a thousand people. The ones he managed to defeat got loaded onto a bus and taken to Dr. Robotnik himself to be put to work.

He was defeated by Sonic, who managed to destroy his hustling robot by beating it at a game in which he had to find the pea under the right nutshell out of three. Smiley tried to warn Robotnik who did not want to listen. Later, he helped Robotnik capture Tails and told Sonic regarding the matter, but Sonic threatened him that if Tails was hurt, he would be back for him.

Smiley was later seen at the stadium selling tickets to the sheep. One of them bet his whole life on Sonic to which Smiley replied that he was. 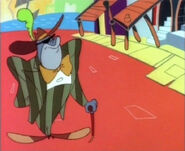 Add a photo to this gallery
Retrieved from "https://sonic.fandom.com/wiki/Smiley_(Adventures_of_Sonic_the_Hedgehog)?oldid=2176106"
Community content is available under CC-BY-SA unless otherwise noted.